EMUI is Huawei’s skin on top of Google’s Android system. This system is usually in Huawei and Honor smartphones until the sales of Honor. After the ban on Huawei by the U.S., the EMUI system no longer had access to many important features. Although Huawei can still use Android because it is an open-source system, it can not use the most important Android features. After the U.S. ban, Huawei’s EMUI system does not come with Google Mobile Services (GMS). This means that the majority of smartphone users outside China can not use their smartphones. To this end, Huawei had to quickly unveil its HarmonyOS (called HongmengOS in China) which it had been developing for a couple of years. 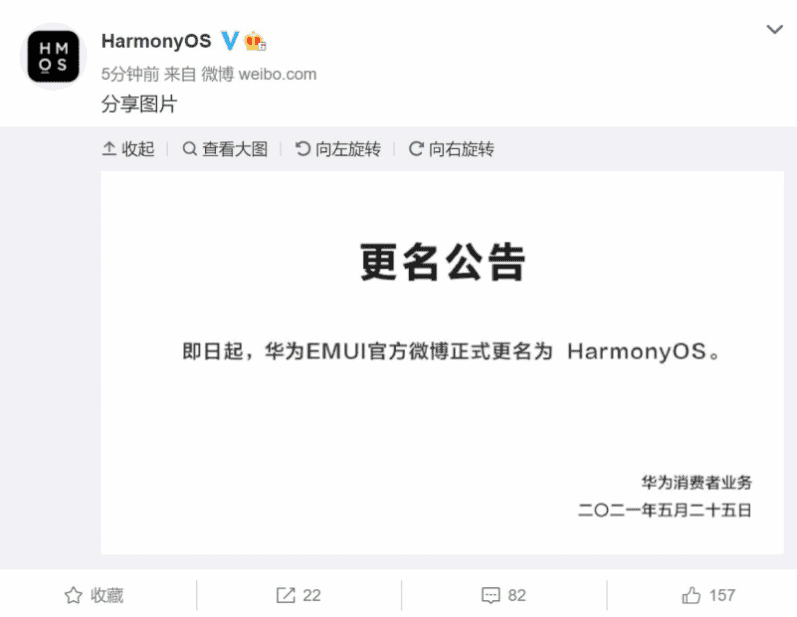 Beginning of the end for EMUI

The arrival of HarmonyOS means that it’s only a matter of time before Huawei phase-out EMUI. It appears that the beginning of the end for EMUI is here. Today, the official Weibo handle of EMUI just changed its name to HarmonyOS. This means that the company is changing its system’s public face. Changing the name of its Weibo handle from EMUI to HarmonOS implies that it does not want the EMUI  name anymore. Like we said earlier, it is the beginning of the end for EMUI.

Interestingly, Huawei already has an official Weibo handle for the HarmonyOS. However, this account is yet to post any information regarding the system. It appears that the company eventually decided to eliminate EMUI instead of retaining both systems. This decision seems logical because EMUI is based on Android but it does not give you access to Google Play Store. This means that it does not have access to millions of Android apps. All the apps that EMUI has access to are on Huawei Mobile Services (HMS), the same system that HarmonyOS uses.

The launch of the HarmonyOS means that all the years of work on the EMUI system will come to an end.

Other manufacturers are in queue to use the HarmonyOS

Yang Haisong, vice president of Huawei’s consumer business AI and smart full-scenario business department, said in an interview with the media recently that the Hongmeng system is completely open to all. This year, according to the established plan, a full-stack system of 128MB-4GB devices will be open for developers. “Three mobile phone manufacturers are welcome to use the Hongmeng open-source system and let’s build it together.” However, “who and when the three-party mobile phone will use the Hongmeng system depends entirely on the manufacturer’s own business considerations.”