While it is very good to have freedom of speech, sometimes, it is important for us to carefully weigh our comments before letting them out. It is even more important when we hold a sensitive position. Many people will not interpret our comments as personal comments. They will consider it to be that of the company or position we hold. An Oppo employee who recently did not bridle his tongue has lost his job for it.  According to China News Network, an OPPO employee resigned after making comments about the HarmonyOS. 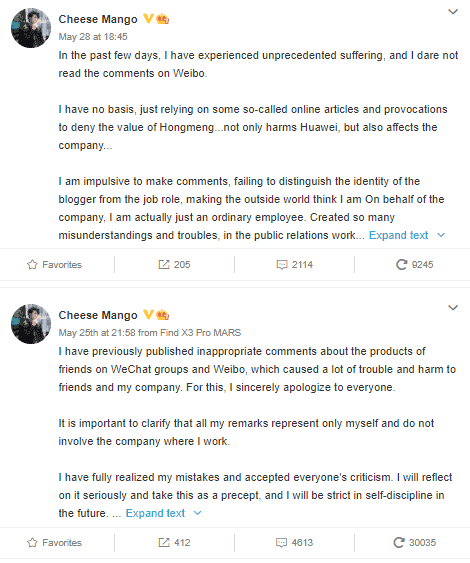 The employee @芝士芒胖 took to Weibo to say … “I have no basis. I denied the value of Hongmeng based on some so-called online articles and provocations, which not only harmed Huawei but also affected the company. Impulsively expressing remarks, failing to distinguish between the identity of the blogger and the role of the job, making the outside world think that I represent the company’s position, in fact, I am just an ordinary employee. Today, I officially ended my work at OPPO and I said sorry to everyone”.

The translation is a bit rusty but we can understand that he had to resign from his job. As an Oppo employee, his comments were interpreted as the stand of Oppo regarding HarmonyOS. However, he clearly states that his comments were based on some online articles. Well, he had to do the honorable thing, Oppo would have probably sacked him anyway.

HarmonyOS to arrive on June 2

Huawei recently announced that the HarmonyOS system will officially arrive on June 2nd. Furthermore, the list of the first batch of devices to get this update hits the web. Upon seeing this, the ex-Oppo employee (public relations staff) made some repulsive comments. His comments went viral on WeChat and it has since triggered heated discussions among netizens.

However, popular Weibo leakster @菊厂影业Fans, Huawei will announce the gradual update time for different batches. His report claim that the first batch of devices to get HarmonyOS is Huawei Mate 40, Mate 40 Pro, Mate40 Pro+, Mate40 RS, MateX2, nova8, nova8 Pro, MatePad Pro. The Chinese manufacturer will officially unveil the Huawei Watch 3 and Huawei MatePad Pro 2 at the June 2 event. It will also unveil a couple of smart screen products.

HarmonyOS is an operating system for the IoT era. It’s only a matter of time before other popular manufacturers begin to announce their interest in this system. For now, only Meizu has made it official. However, Meizu will use this system on its smart lightning products, not smartphones or smartwatches for now.

Next Huawei MatePad Pro 2 with HarmonyOS branding and price exposed