As of now, a couple of Xiaomi’s flagships are on the line. According to reports, Xiaomi is currently developing at least three smartphones with under-screen camera technology. Obviously, the under-screen camera technology will be for flagships. As of now, there is one flagship processor without a rival, Snapdragon 888. We expect the Xiaomi Mi MIX 4, Xiaomi CC 11, and Xiaomi Mi MIX Fold 2 to arrive soon. These smartphones are all flagships and should use a flagship processor. Today, a new Xiaomi model appeared on the GeekBench database. This smartphone comes with model number M2102K1G. 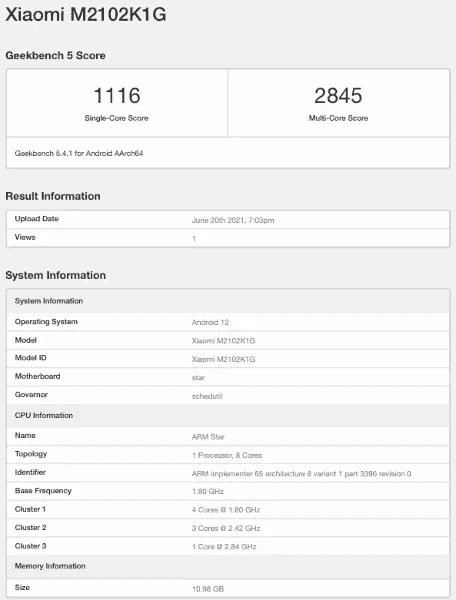 GeekBench shows that this smartphone comes with the Qualcomm Snapdragon 888 flagship processor. The device also uses 8GB of RAM and runs the Android 12 operating system. According to 91Mobile, this device is the global version of the Xiaomi Mi 11 Ultra. Furthermore, the report claims that the Mi 11 Ultra here may be running a beta version of the Android 12.

After the announcement of Android 12, Xiaomi was also announced as one of the first smartphone manufacturers to test this system. As of now, a couple of Xiaomi smartphones can upgrade this system. The likes of Xiaomi Mi 11 Ultra, Xiaomi Mi 11X Pro, and other models can update the Android 12 developer preview version.

As a new generation operating system, Android 12 has two major upgrades: appearance and security and privacy protection. Android 12 adopts the new Material You design language, which can match the colour combination according to the colour you choose. It can also use a custom wallpaper to choose a more beautiful and harmonious colour combination for you. This then becomes the theme colour of Android 12.

The Xiaomi Mi 11 Ultra is a flagship smartphone that brought Xiaomi into the flagship market. Previously, Xiaomi has been releasing flagship devices with a mid-range price tag. However, with the Mi 11 Ultra, the company fully entered the flagship price segments. The Mi MIX 4, CC 11, and MIX Fold 2 will all be flagship smartphones with flagship prices. As of now, there is not much information regarding these devices. We will let you know when we have more information. Keep a tab with us.

Next Huawei P50 series to use an ultra-high pixels 1/1.18" outsole main camera