In March, the realme GT was unveiled, which offered flagship hardware, a 120Hz Super AMOLED display, and 65W powerful charging. Four months after its release, the company wants to release a designer version of it, and Japanese designer Naoto Fukasawa was called to create it. The device will be called realme GT Master Edition and will be released in July.

This is not the first time that the company has used the services of a designer from Japan. The hand of the master has previously touched the creation of realme X Master Edition, realme X50 Master Edition and realme X2 Pro Master Edition. He believes that it is worth creating only those things that people really need. As simple as possible to use, convenient and so good that you can live with them all your life. He has collaborated with brands such as Apple, Epson, Hitachi, Samsung, Sharp, Seiko, Toshiba and others.

But external transformations will not end, the realme GT Master Edition smartphone will also change inside. Instead of Snapdragon 888, they will offer Snapdragon 870 and pump the main camera, offering a system of three 108 MP + 13 MP + 2 MP sensors. Instead of the 6.43-inch panel with a 120 Hz refresh rate, we will get a 6.5-inch panel with a refresh rate of 90 Hz. But the battery in the realme GT Master Edition will be left unchanged – 4500 mAh with 65 W fast charging. 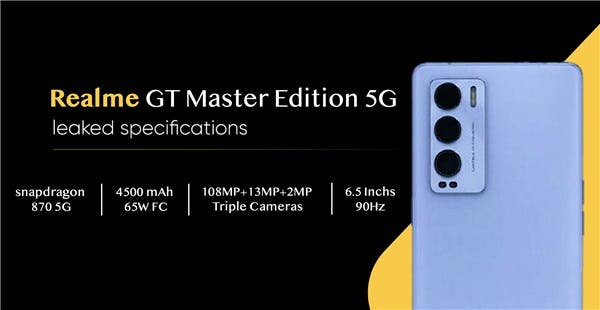 Here is a reminder of the specifications of the realme GT 5G smartphone.

The realme GT 5G comes in Racing Yellow, Dashing Silver and Dashing Blue colours, and cost €449 (about $ 543) for the 8GB RAM with 128GB storage version.

Here’s How You Can Buy the Realme GT Master Edition With an Effective Discount of Rs 5,000