According to reports out of China, NuVolta Technologies, a semiconductor company, recently launched a second-generation pump fast-charging chip. The product comes with the model number “NU2205”. According to the company, NuVolta NU2205 is the single-chip pump fast charging chip with the highest power in the industry. The company claims that the charging power can reach 100W. It is also the only chip in China that supports the dual-cell 4:2 pump fast-charging architecture. NuVolta Technologies claims that the successful development of this chip will help break the monopoly of foreign manufacturers in the dual-cell fast charging industry. More importantly, the company also claims that the chip can provide a 200W dual-cell fast charging solution for smartphones. This is also the highest power fast charging that is currently unique on the market.

In addition, the chip not only achieves an absolute lead in speed but also guarantees lower heat generation throughout the entire process. The company claims that under the condition of 25°C ambient temperature and 16V input, 2 batteries can be charged at 10A and 20A high currents. The temperature rise corresponds to only 44.9°C and 46.8°C respectively.

It is also important to note that at the launch of this chip, the company used the Xiaomi Mi 11 / Mi 11 Pro images. This suggests that there is active cooperation between NuVolta and Xiaomi.  Xiaomi is expected to release the mass production version of V. Up to 200W charging technology. 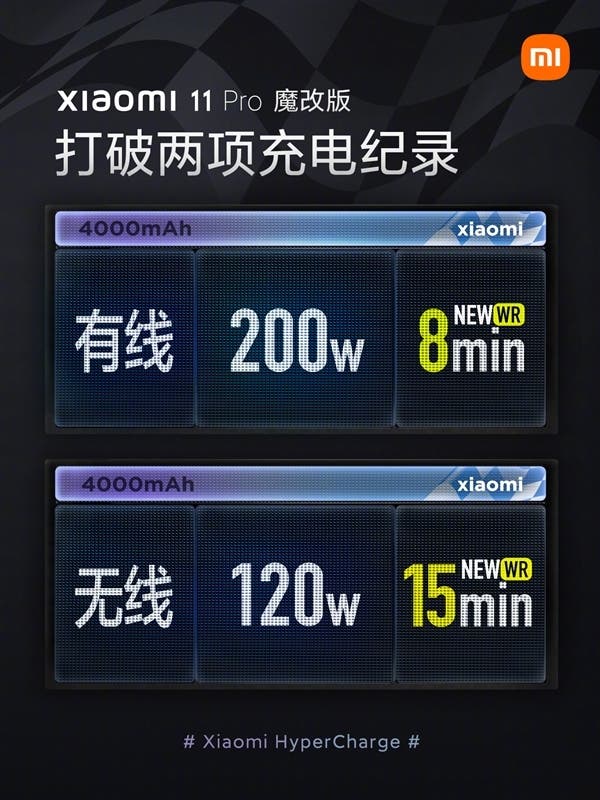 Back in May, Xiaomi officially announced that the high revision of Xiaomi Mi 11 Pro broke two world records. Xiaomi’s 200W wired fast charger can charge a 4000 mAh battery from 0% to 100% in 8 minutes. This charging capacity will achieve 10% in 44 seconds, and 50% in 3 minutes. This is the first time that wired charging has entered the ten-minute timeline. The Xiaomi 120W wireless fast charging can be used to charge a 4000 mAh battery to 100% in 15 minutes. This is also the first time that wireless charging has broken through the 100-watt mark. In addition, Xiaomi also claims that for the first time, a smartphone can get a full charge in under 10 minutes.

Xiaomi engineers claim that after 800 cycles of use, the energy of Xiaomi’s battery remains above 80%. This is much higher than the Chinese requirement of “after 400 cycles, the battery life should not be less than 60%”. This means that Xiaomi’s 200W fast charging beats the Chinese industry standard.

At that time, Xiaomi did not officially announce the specific implementation plan. However, with the announcement of NuVolta NU 2205, it appears that Xiaomi will use the dual-cell solution.