Realme officially announced that it will hold an online conference for the new Realme GT Master Series on July 21. Today, we saw not only official promo materials but also leaked photos of the real phone. Before we commence getting acquainted with the key features of the phone and look at the design elements it uses, we should recall that this is the industry’s first mobile phone with a stereo 3D plain leather process. Due to it, an aluminum alloy metal frame has the same color as the body. 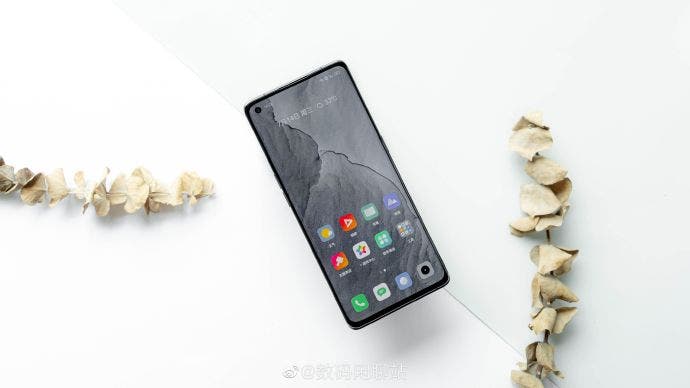 Well, though the photos we got from the manufacturer disclose everything about its design, it’s always better to take a look at the real photos. A couple of the Realme GT Master series photos published by a Weibo tipster show the front of the machine uses a punch-hole design. The hole is placed in the upper left corner. The edges are curved for more comfortable holding.

The front camera resolution should be 32MP. And the rear camera will come with a 64 MP + 8 MP + 2 MP sensors combination. Despite the predictions for a 108MP sensor, the current leak indicates that the set of modules is similar to that offered by the Realme GT. But this doesn’t mean the new phone will have a poorer shooting performance. The company continues cooperation with Kodak. So we should expect a quite good photography performance.

The rest of the specs include a USB Type-C port and a 3.5mm headphone jack. It will weigh only 174 grams with a case thickness of 8 mm. The smartphone will land in Europe for 399 euros and 449 euros. These price tags corresponds to 8/256GB and 12/256GB versions, respectively.

In fact, we are dealing with a mid-range handset that can boast of a new look and a balanced performance due to the Snapdragon 870 chip. But the latter can be found on a many models. So the selling point of our protagonist is going to be the look.