Nubia Red Magic 6S Pro has passed through the TENAA certification website, giving us a glimpse of its specifications and other key details. The upcoming gaming smartphone has made multiple appearances online in the form of leaked images. Aside from that, it has been subject to several speculations surrounding its upgraded specifications. The leaks, coupled with the rumors making the rounds on the web, hinted at the phone’s imminent launch.

The company had already launched the Nubia 6 and the Nubia 6 Pro earlier this year, and it was received well. So, there’s understandably a lot of hype around the latest entrant in the Nubia 6 lineup. Aside from divulging all sorts of details, new reports have indicated that the Nubia 6S series could go official during the company’s upcoming launch event. ZTE’S gaming brand Nubia unveiled the Red Magic 6 lineup during its flagship launch this year.

A new Nubia phone with model number NX699J-S passed through the 3C authority of China last month. This suggests that the company will be launching another gaming-centric phone soon. According to a report from MySmartPrice, the Red Magic 6S Pro could go official in China on September 6 at 3 PM (local time). After appearing on the 3C website, the Red Magic 6S Pro has made its appearance on the TENAA certification website. As expected, the TENAA listing has revealed a few key specs, while offering a clearer view of the phone’s design.

The Nubia NX669J-S phone that has received the certification from TENAA is likely to debut as the Red Magic 6S Pro in China. It will come with a mammoth 6.8-inch OLED display that offers a Full HD+ resolution of 1080 x 2400 pixels. Furthermore, the fingerprint sensor has been embedded into the display. Under the hood, it will pack a powerful Snapdragon 888 Plus SoC. Moreover, the phone could ship with 8GB, 12GB, and 16GB of RAM and offer 128GB, 256GB, and 512GB of onboard storage capacity. Aside from that, it will run on Android 11 OS with Red Magic UI on top. It will feature an aerospace-grade cooling system for efficient heat dissipation and 450Hz dual gaming trigger shoulder buttons. 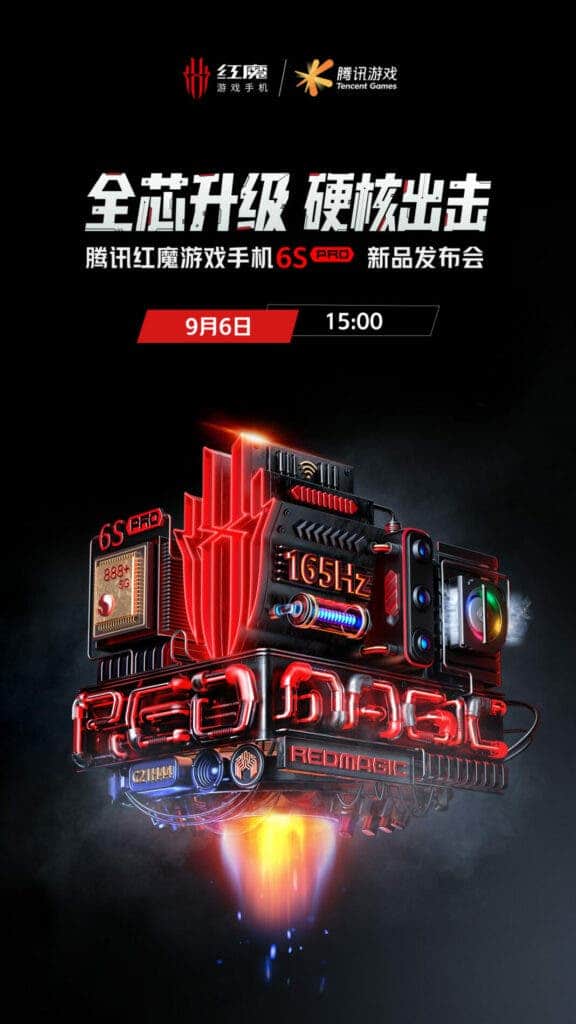 In the optics department, the device will house an 8MP front shooter and a 64MP triple camera module at the back. Regrettably, the TENAA listing does not shed light on the exact battery capacity. However, new reports suggest that it will have the same 4,500mAh battery that powered up the Chinese version of the Red Magic 6 Pro. If the 3C listing is anything to go by, the phone will offer 120W fast charging support. Nubia has confirmed some details including a 7.4ms response rate and 720Hz touch sampling rate.