After launching the new iPad 9, the iPad mini 6 and the new Apple Watch Series, the Cupertino firm took wraps off the much-anticipated iPhone 13 series. Tow out of four models – iPhone 13 Pro and iPhone 13 Pro Max – were in the spotlight. As you guess, they come with the latest hardware and software features but they also cost a fortune.

The iPhone 13 has a 6.1-inch display, while the highest iPhone 13 Pro Max has got a gigantic 6.7-inch display. When it comes to the thickness, we see that the larger battery has affected its slender design. Moreover, the cameras on rear have also gotten bigger. Inside, they host the newest Apple A15 Bionic processor. Well, as there are four different models, it’s better to take a detail look at each of them.

Two new Pro-labeled iPhone 13 models adopt the same design as last year’s models. They have flat sides and screens, but as said, the body has become thicker. The Face ID has shrunk in size too. The rest remains unchanged. These phones are made of toughened glass and feature a stainless steel frame. The latter makes the phone be heavier in comparison to the aluminum-made non-Pro iPhones. Plus, these two also support IP68 water protection.

The iPhone 13 Pro sports a 6.1-inch OLED screen, while its bigger sibling comes with a 6.7-inch OLED display. Unlike the slight size difference, both look outstanding. Also, they do not lose their “functionality” under bright sun light. We can’t say the same for the regular iPhone 13 models. However, they now support the 120Hz ProMotion screen technology. We understand that this has been available for Android smartphones for a long time. But Apple likes bringing “tested” features to its iPhones. And now, it arrives to the iPhone.

Getting back to the vanilla iPhone 13 and the iPhone 13 mini, the former has a 6.1-inch screen, while the latter comes with a 5.4-inch display. Both use an OLED panel, and there is an aluminum frame between two slabs of glass.

Unlike the iPhone 12, the iPhone 13 still has the same broad look. We can noticed a slimmed-down Face ID notch, which is 20% smaller now.

Of course, the biggest upgrade over the previous models is the Apple A15 Bionic processor. The latest chip made by Apple has a number of improvements and is promised to have a true advantages in comparison to the Android models. It still uses a 5nm process and has a 6-core CPU. But as Apple proves, it’s the “fastest CPU in a smartphone,” up to 50% faster than the competition. The GPU performance has been improved by 30%.

Also, the iPhone 13 Pro and Pro Max come with a starting 128GB native storage. But there are 256GB and 512GB versions as well. And what’s surprising, there is a 1TB model for the most demanding users. 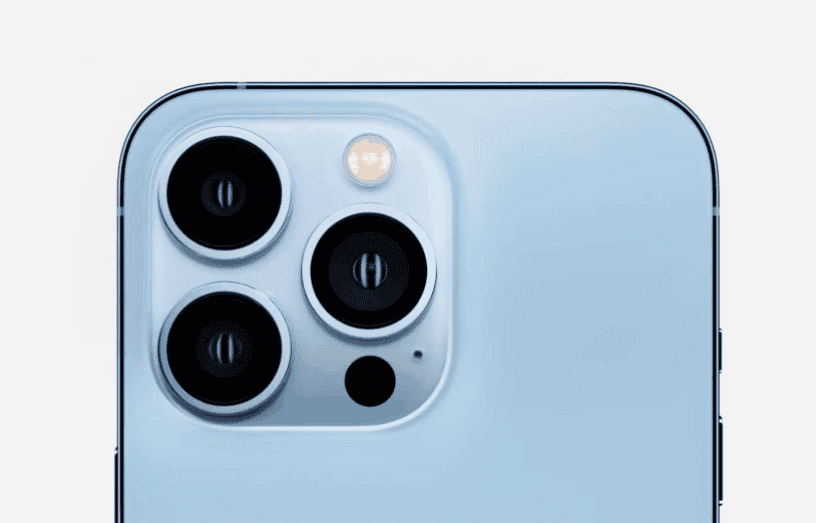 Apple is also promising improved 5G performance compared to the iPhone 12. These phones will support 200 carriers in over 60 countries and regions by the end of the year.

The Pro iPhone 13 models come with a triple-camera on the back. The main sensor is an ultra-wide and a zoom lens. By the way, the zoom lens is missing on the other two, non-Pro iPhones. The two sensors ensure quality shooting.

However, all four iPhone 13 models support the new Cinema Mode. In other words, this is the same Portrait Mode for videos. It blurs the background and leaves only the subject in sharp focus. 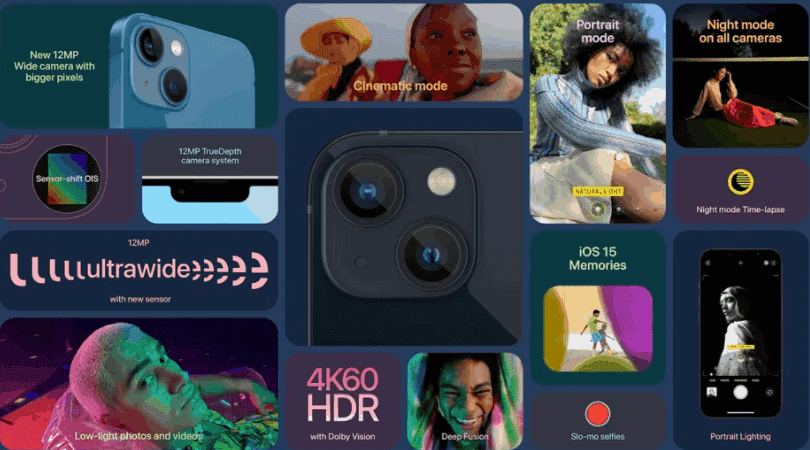 The Pro models support for the ProRes codec. In some sense, it is like the RAW mode, allowing users a lot more flexibility when color grading.

Lastly, the LiDAR sensor remains an exclusive for the Pro models.

The iPhone 13’s new wide sensor has a 12MP resolution and an f/1.6 aperture. At the same time, the new 12MP ultra-wide camera features a faster f/2.4 lens and 120-degree field of view. Our protagonist also supports a sensor-shift stabilization technology. But this is not anything new and we know it from last year’s iPhone 12 Pro Max. As for its working principle, it physically moves the wide sensor to reduce vibrations.

The iPhone 13 Pro Max has the biggest battery among all four models. And though there is still no information how bigger it is in numbers, the company proves the capacity improvement is around 20%. Moreover, the iPhone 13 Pro has got a 10% larger battery.

Probably you already know that the new iPhones won’t come with chargers in the box, only the cable. But all four new iPhones support a 15W MagSafe wireless charging.

They will be available for purchase on September 24th.