Prior to this, we have seen the Pixel 6 duo leaked in various documents and photos. Today, the Carphone Warehouse retailer published the pages for both models. [At the moment, they are removed. But GSMArena has managed to take screenshots.] So before taking look at the information posted by the retailer, we also recommend you to get acquainted with the features we know about the upcoming Google phones. As a reminder, they are set to hit the market on October 19.

The most interesting thing about this handset is that it will come with Google’s first self-developed chipsets. Before this, the company has designed IPS chips for cameras. But it was a separate chip, not an SoC. As for the Google Tensor, it is known for coming with on-device AI hardware for accelerating features like Night Sight, Portrait Mode, and the new Magic Eraser. The most outstanding feature it offers is the special design for power efficiency. Plus, it is promised to be 80% faster than the Pixel 5’s Snapdragon 765G. 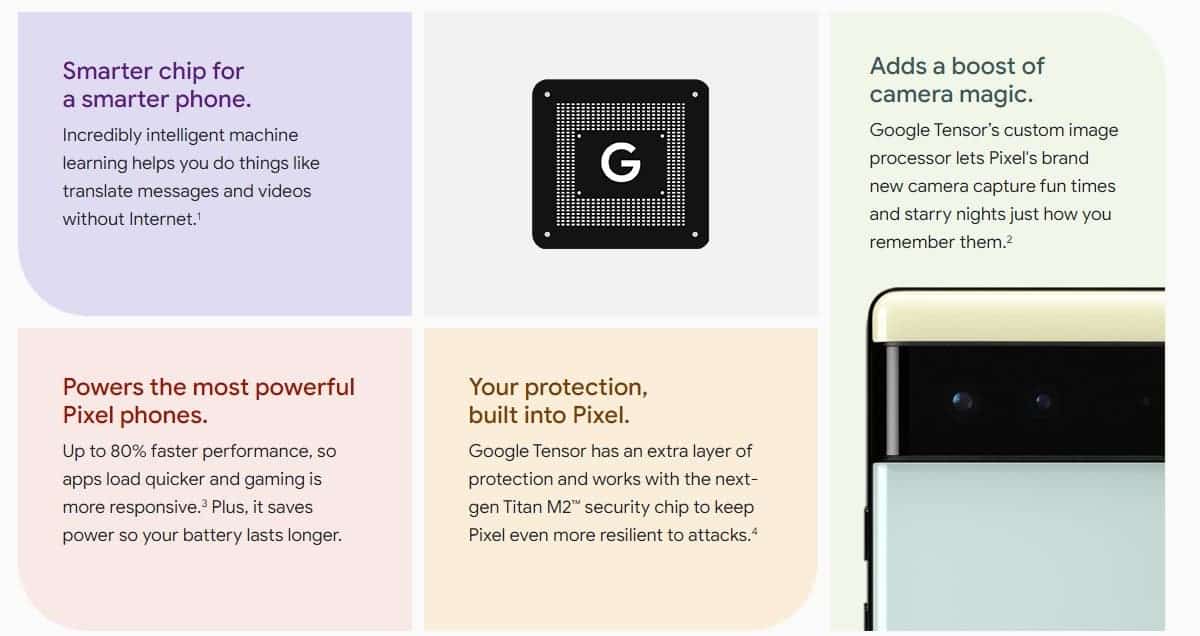 Moreover, the Google Pixel 6 Pro will sport the most powerful camera ever found on a Pixel phone. The main lens has a 50MP resolution, which is way larger than the tiny 1/2.55” sensor inside the Pixel 5. The upcoming model’s camera will capture 150% more light. So it shouldn’t face any problem when shooting night photos.

Apart from this, Google gets back the telephoto lens. It will offer 4x optical zoom. But it also supports the 20x zoom through the Super Res Zoom feature. The ultra-wide camera will have a 12MP resolution. When it comes to the selfie shooter, we should say that its 94º field of view camera will be ideal.

Google will also add an interesting feature to the camera app. It’s called Magic Eraser. This is an AI tool that allows you to remove unwanted people and objects from your photo. We guess it will be one of the favorite features of this camera. Another feature we want to pay attention to is the Face Unblur. The latter rescues blurry photos by restoring the face of your subject.

The Pixel 6 Pro’s battery will get power through the USB Type-C port and a 30W charging. So it can reach 50% of power in 30 minutes. But you should know that the 30W charger will not be included in the box. The battery will also support 23W wireless charging.

The Google Pixel 6 Pro will also sport a 6.7-inch LTPO OLED panel. It will support variable refresh rates ranging from 10Hz to 120Hz. The phone will have the best protection from scratches due to the Gorilla Glass Victus. Also, the handset will be IP68 dust- and water-resistant.

Well, all these features sound quite attractive. But what makes the Google Pixel 6 Pro really stand out is the security. There will be a new Titan M2 chip, which is promised to have more advanced security features than the Titan M introduced with the Pixel 3 series. To help it fight off new attacks, Google will provide 5 years of security updates.

One of the biggest highlights is going to be the offline translations in 55 languages. You can even open the camera app, point it at a sign and get it translated, or get translated captions for a podcast. The new Pixel 6 phones will come with the new Android 12 system. And as you guess, some features are Google-exclusive.

We already said that the 30W charger won’t be included in the package. But apart from the 30W USB-C charger, there is also the Pixel Stand wireless charger, which can turn the phone into a hub. Thus, through it, you can control smart home appliances. It can even turn into a photo frame to show pictures from Google Photos. The new translucent protective case made with over 30% post-consumer recycled plastics looks amazing as well. 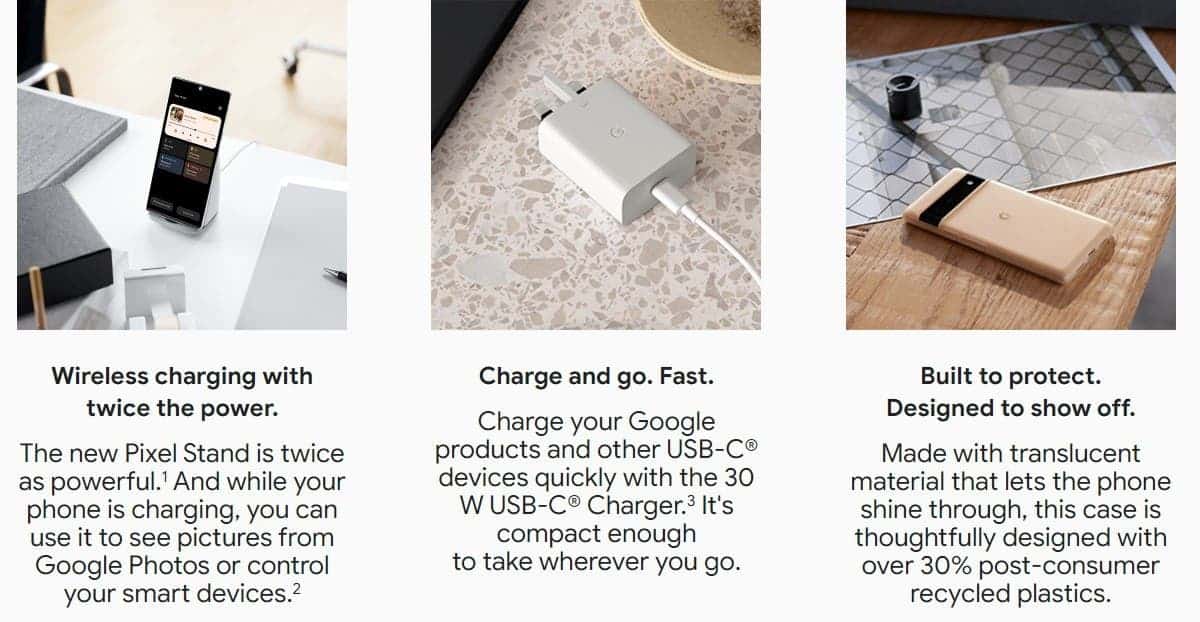 Like the higher version, the smaller Pixel 6 comes with the Google Tensor chipset as well. Of course, there is the same Titan M2 security chip as well. Moreover, we will find the same 50MP main and 12MP ultra-wide cameras on the back. However, there will be no telephoto lens.

Its display will be 6.4 inches diagonally and it will use OLED material. The latter will support a high refresh rate, but it doesn’t sound like an LTPO panel. Due to the same Gorilla Glass Victus, the phone will be protected from scratches. It has got an IP68 rating for dust and water resistance.

The same set of accessories can be purchased for the vanilla Pixel 6. But you should know that the wireless charging is a fraction slower – 21W.

Previous Redmi will abandon MIUI and have its own user interface