It’s hard not to agree with SAMMOBILE when it says that the Samsung Galaxy Z Fold 3 is a very feature-rich folding-screen phone. However, we should also note that it’s not a premium smartphone with the latest features. Say, it still misses an in-screen fingerprint recognition sensor. We understand that there is a technical barrier to using this technology in Samsung’s folding screen handset. We are talking about the unconventional plastic-glass hybrid screen of the phone. However, according to a new Samsung patent document, the upcoming Galaxy Z Fold 4 folding screen phone may sport a new in-screen fingerprint recognition sensor.

LetsGoDigital accidentally found a Samsung patent on the World Intellectual Property Organization (WIPO) website. It talks about a double-sided fingerprint sensor. Basically, it will be located between the cover screen and the main screen. Since the cover screen uses a traditional AMOLED panel, it should not have trouble verifying fingerprints like other smartphones.

The source also mentioned that the two sensors will interface with the mainboard through a PCB (printed circuit board). It is interesting to see what tricks Samsung will use to make the fingerprint sensor on the secondary display play its role. 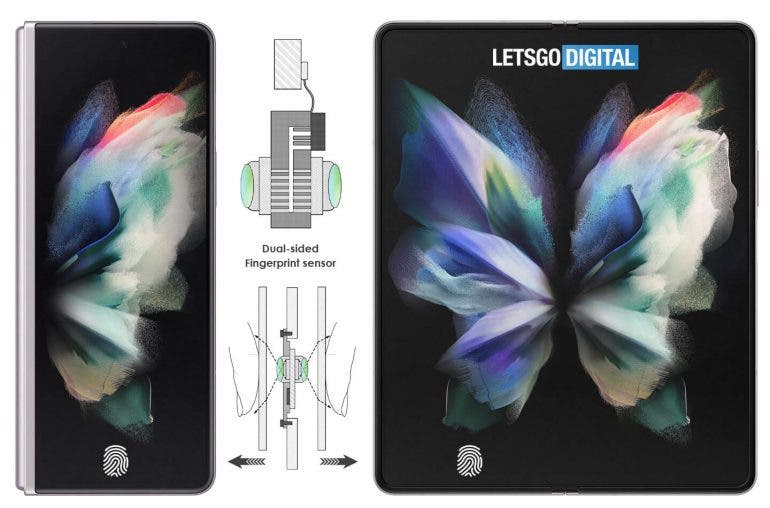 The patent doesn’t mean Samsung will definitely use it. But Samsung may mix things up and use a combination of ultrasonic and optical fingerprint sensors. The cover display can use the former, and the main screen can use the latter. The optical fingerprint sensor on the main screen will be easy to calibrate, although it may take several iterations to make it perfect.

Nevertheless, the Samsung Galaxy Z Fold 3 comes with a side fingerprint sensor, which performs quite well. Strictly speaking, Samsung has no reason to switch to optical/ultrasonic alternative technology. But if the Korean company decides to use this approach, it will make the forthcoming Galaxy Z Fold 4 stand out. Also, it will become the world’s first folding-screen phone to adopt this technology.

As for the launch date, if nothing is changed in Samsung’s strategy, the Galaxy Z Fold 4 will hit the market in August-September 2022. AT least, the previous generations were announced in the same months.

Unfortunately, the rumors coming our way from SAMMOBILE are the only news we know at the moment. But Tom’s Guide has created a list of wanted features. They include onboard S Pen storage, better-hidden display creases, slimmer frame, longer battery life, etc. Well, there is still a lot of time before the product will go into production. So everything might happen.