Though this is not a new-gen gaming smartphone and just a little iteration, many mobile gamers have been waiting for this handset eagerly. Today, following the schedule, the Xiaomi-related company unleashed the Black Shark 4S/Pro gaming phone series. It comes with Snapdragon 870 and 888 Plus processors, and the price starts at 2699 yuan ($420).

However, we are dealing with a gaming smartphone, which simply means it should have powerful hardware. The vanilla version sports a Snapdragon 870 processor, LPDDR5 RAM, and UFS3.1 native storage. The 4500mAh battery supports 120W high-power charging. Also, there is a standard 120W charger and a 6A charging cable in the package. Due to the fast charging, it can reach 50% of power in 5 minutes, while the phone gets fully charged in 15 minutes.

The Black Shark 4S Pro gaming phone has two colors: Galaxy Black and Skyline White. Inside, it carries a Snapdragon 888 Plus processor, the full-blood version of LPDDR5 memory, the enhanced version of UFS3.1, and a dual-disk array 2.0 composed of customized SSDs. The cache queue is deeply optimized. The read and write performance is greatly improved as well.

As a gaming phone, the Black Shark 4S/Pro has also improved its gaming experience. The machine adopts an upgraded version of the magnetic power shoulder button. The latter has evolved to a 7-pole magnet. Now, the shoulder button rebounds more crisply and neatly. Also, due to the added guide slope, the toggle process is smoother.

In addition, the shoulder button of the Black Shark 4S/Pro has an upgraded button shape. It brings a more comfortable pressing feeling, precise shooting, and should be what advanced multi-finger players are looking for.

In terms of pressure-sensing control, the Black Shark 4S/Pro is the first to come with the dual-zone screen pressure-sensing 5.0 in the Android camp. The left and right areas are fully symmetrical. The pressure-sensing level is adjusted in 7 levels, and the trigger force is as low as 160g.

As for the audio experience, the Black Shark 4S/Pro has a 15V smart power amplifier. It has a 50% increase in drive power. The large amplitude 1216 linear speaker adopts a fully symmetrical large sound cavity design and comes with a professional-level tuning algorithm.

In addition, the JOYUI 12.8 system of the Black Shark 4S/Pro has a number of improvements, such as the “Smart Cube” and “Shark Sauce” functions.

The company also introduced the Black Shark 4S Gundam limited edition. The fuselage is engraved with free Gundam classic red and blue lines. It comes with a deeply customized-boot animation theme of Gundam.

The Black Shark 4S/Pro gaming phone is already available for pre-sale and will go on sale on October 15th. 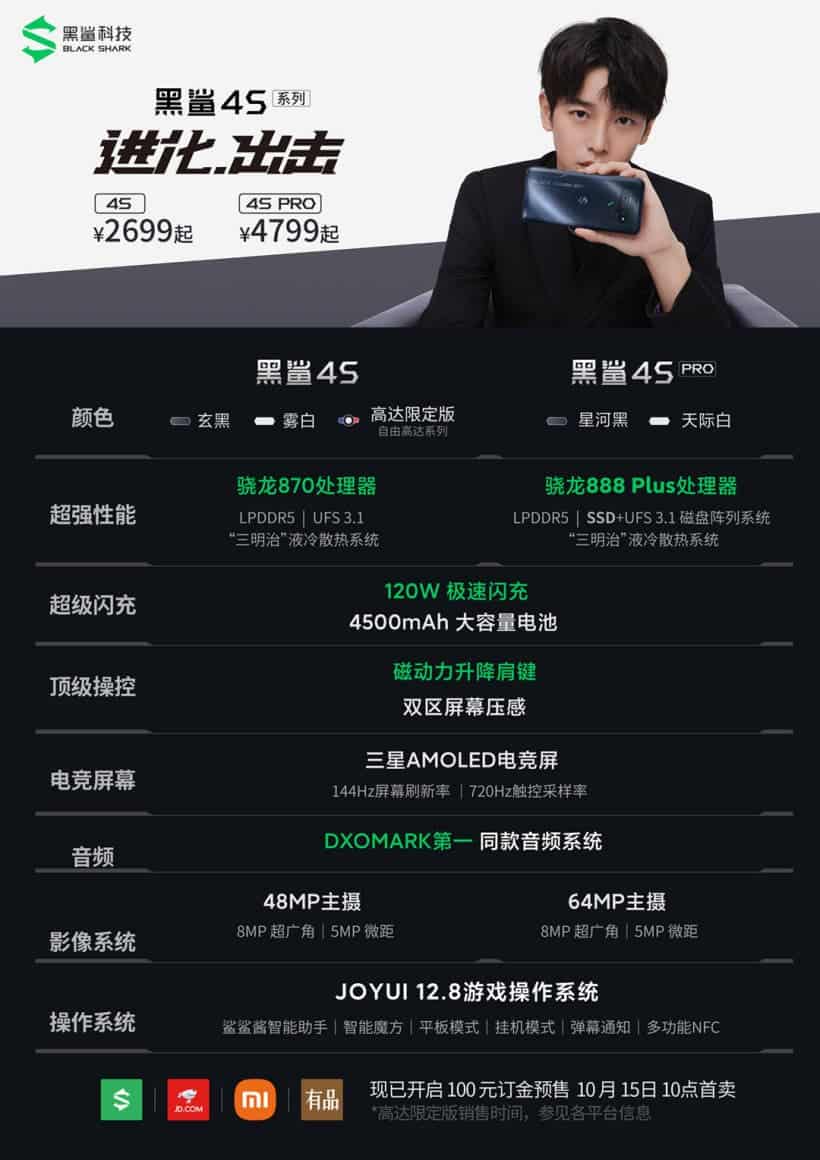 Previous Huawei confirms the protagonist of its October launch event

Next Nokia G300 Entry-Level Smartphone Launched In US At $199