We know that when the Google Pixel 6 Pro is out, officially, Google will debut its Tensor chips. But no need to think that with this SoC, the company is going to compete with the famous chip makers. As recently, wccftech reported, the Tensor is not going to be the fastest chip on the globe. In other words, it will be just a serious move to become more independent rather than entering the niche. On the contrary, Google will focus more on efficiency.

Also, some tipsters found the Google Tensor chip spotted in GeekBench. So when comparing the Google Pixel 6 Pro and the iPhone XS Max (2018), we see that the Tensor even yields the 3-year old Apple model. In other words, the Google Tensor SoC will be able to barely compete with the Apple A12, which was launched three years ago. Thus, in this field, Google is laying behind Apple by at least three years.

As for the GeekBench 5 performance score provided by 9lekt, we clearly see that the A12 chip on the iPhone XS Max scores 1117 points and 2932 points in the single-core and multi-core tests, respectively. At the same time, the Google product scores 1012 and 2760 points in the same tests.

At first sight, though the scores gap is not that big, in reality, this could be quite noticeable. Of course, until the Google Pixel 6 Pro is not out, we can make final conclusions. But even now, it seems that the most powerful Google phone wouldn’t be able to make tough competition to the old iPhones. 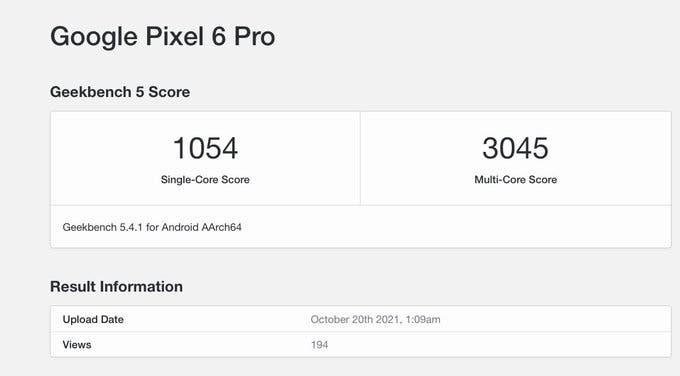 However, the benchmark test results can only explain half of the problem. We mean what you see does not necessarily translate into actual performance. We must also consider optimization.

But due to its increased control in hardware and software, the operating system may run smoother on its phones than on competing phones. In some sense, by using its own chips (hardware), Google might copy Apple’s strategy. The Cupertino company matches hardware with software. Simply put, Apple’s hardware and software are made for each other.

However, these are just assumptions. The final answers will be given when Google unleashes the Pixel 6 and the Pixel 6 Pro.