South Korean smartphone giant Samsung’s Galaxy M52 5G has received a price cut in offline stores in the country of India. For those unaware, Samsung launched the device in the country on September 28 and, a month from its release, it has now been subject to a price cut.

The phone is now going to be available for a lower price in offline stores and Samsung’s e-commerce store for a short period of time. At the time of launch, the device was set to retail for Rs 29,999.

How Much Will the Samsung Galaxy M52 5G Cost Now? 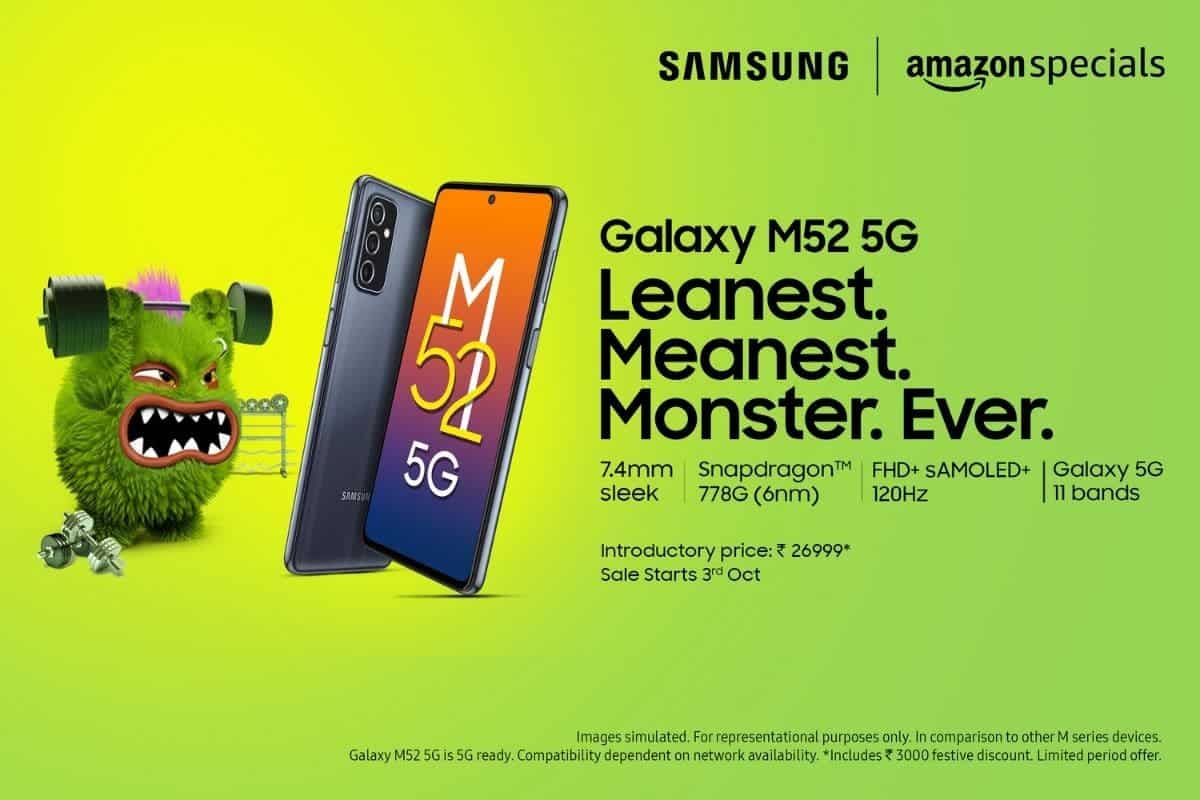 This new pricing is going to be applicable starting today across offline stores and Samsung’s e-commerce store, with Amazon’s listing showing Rs 25,999 and Rs 27,999 for the two variants. It seems that this pricing is likely for some time, October 31 to be exact.

What Does the Device Have to Offer?

The Samsung Galaxy M52 5G makes use of a 6.7-inch Super AMOLED display with a resolution of FHD+ and an Infinity-O notch to the top, which houses the front shooter. This display comes with Corning Gorilla Glass 5 for protection against accidental drops and scrapes.

Furthermore, when it comes to performance, the device relies on the Qualcomm Snapdragon 778G SoC with Adreno’s 642L GPU, with up to 8GB of RAM and 128GB of internal storage. A 5000 mAh battery with 25W fast charging powers the device.

Towards the rear of the device, there is a triple-rear camera setup with a primary 64MP shooter coupled with a 12MP ultra-wide shooter and a 5MP depth sensor. Selfies are reliant on the 32MP front shooter.

To add to the list of features, connectivity options include dual 4G VoLTE, 5G SA/NSA, WiFi 802.11, Bluetooth 5.0, GPS. The device boots One UI 3.1 on top of Android 11 out of the box. The Samsung Galaxy M52 5G is available in two hues, namely Icy Blue and Blazing Black.

Apart from this, at the time of launch the device was available with an offer. As part of the introductory offers, Prime customers of Amazon can get a discount of Rs 1,000 on the purchase of the device on top of any additional bank offers. No-cost EMI and exchange offers are also available for the device in the country.