Between July and September inclusive, 331.2 million smartphones were sold globally. For comparison: a year earlier shipments were equal to 354.9 million units.

Thus, the fall in annual terms was about 6.7%. This situation is primarily due to the shortage of electronic components. Difficulties with the production of components hit a wide variety of industries: computer and household appliances, the automotive industry, server equipment, etc. 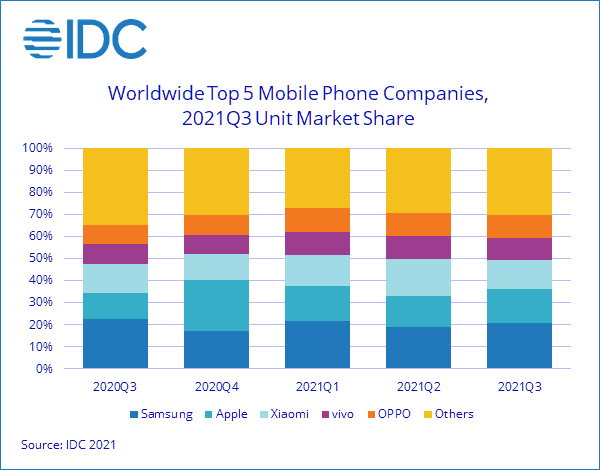 Quarterly sales of smartphones decreased due to lack of components

“The supply chain and component shortage issues have finally caught up to the smartphone market; which until now seemed almost immune to this issue despite its adverse impact on many other adjacent industries;” said Nabila Popal, research director with IDC’s Mobility and Consumer Device Trackers. “In all honestly, it was never fully immune to the shortages, but until recently the shortages were not severe enough to cause a decline in shipments and was simply limiting the rate of growth.

However, the issues have now compounded, and shortages are affecting all vendors alike. On top of component shortages, the industry has also been hit with other manufacturing and logistical challenges. Stricter testing and quarantining policies are delaying transportation and power supply constraints in China are restricting manufacturing of key components. Despite all efforts to mitigate the impact, all major vendors’ production targets for the fourth quarter have been adjusted downwards. With continued strong demand, we don’t anticipate the supply-side issues to ease until well into next year.”

In a news related to the shortage of electronic components, and since the launch of the iPhone 13 series, there have been multiple issues associated with this series. Nevertheless, is not stopping customers from purchasing this device. According to Apple’s initial plans, it will produce 90 million new iPhone 13 units in the fourth quarter of this year. However, internal sources claim that due to chip shortages, Apple is likely to lower its production plan for the iPhone 13 series to 80 million units.