In China, Huawei has been massively pushing the HarmonyOS 2 update. As of now, the company has released this update to no less than 150 million units. However, it appears that HarmonyOS is not ready to leave China. For global users, they will have to make do with the EMUI 12 update. Huawei’s Android-based EMUI 12 has quietly been launched on the global official website. A few days ago, Huawei announced a list of EMUI 12 adaptations. It seems that only global models can get this update. Of course, this is reasonable because the Chinese models are already getting HarmonyOS 2. 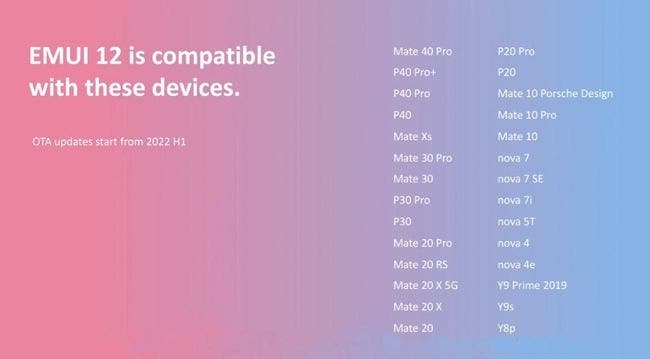 This list of devices includes smartphones in the Mate 10, 20, 30, and 40 series. It also has smartphones in the P series including the P20 and P40 series. Furthermore, this list also contains smartphones in Huawei’s nova series (nova 7, 5T, and 4 series) as well as the Y series. According to Huawei, it will start pushing this update in the first half of 2022. However, smartphones like the Huawei nova 8 and nova 9 already comes with EMUI 12 out of the box. This update is based on Android 11.

As of September 13th, HarmonyOS 2 users officially exceeded 100 million. On September 27th, the company announced that HarmonyOS active users have exceeded 120 million users. Judging from this growth rate, HarmonyOS is advancing almost at an average daily upgrade volume of 1 million. It is obvious that this system will have well over 300 million users before the end of this year. This upgrade is Huawei’s largest system update in its history. The Chinese manufacturer also hopes to release this system to 400 million devices by the end of the year