According to some recent reports, Motorola will soon announce the Moto Tab G70 mid-range tablet. Information about the new product, in particular, appeared in the Google Play Console database.

The “heart” of the tablet will be the processor with the code designation MT8183A. This is a variant of the Kompanio 500 (MT8183) chip, specially designed for tablet computers. The product contains eight computing cores in the form of quartets Arm Cortex-A73 and Arm Cortex-A53 with a clock speed of up to 2.0 GHz. The integrated Arm Mali-G72 MP3 accelerator is busy with graphics processing. Implemented support for Wi-Fi 5 (802.11a / b / g / n / ac) wireless communication, FM radio and GPS.

It is said about the presence of 4 GB of RAM. The operating system Android 11 is listed as the software platform.

Network sources add that the new product will hit the market in versions with 64 and 128 GB of built-in flash memory. Probably, there will be versions with and without cellular support. There is no information about the estimated price yet. 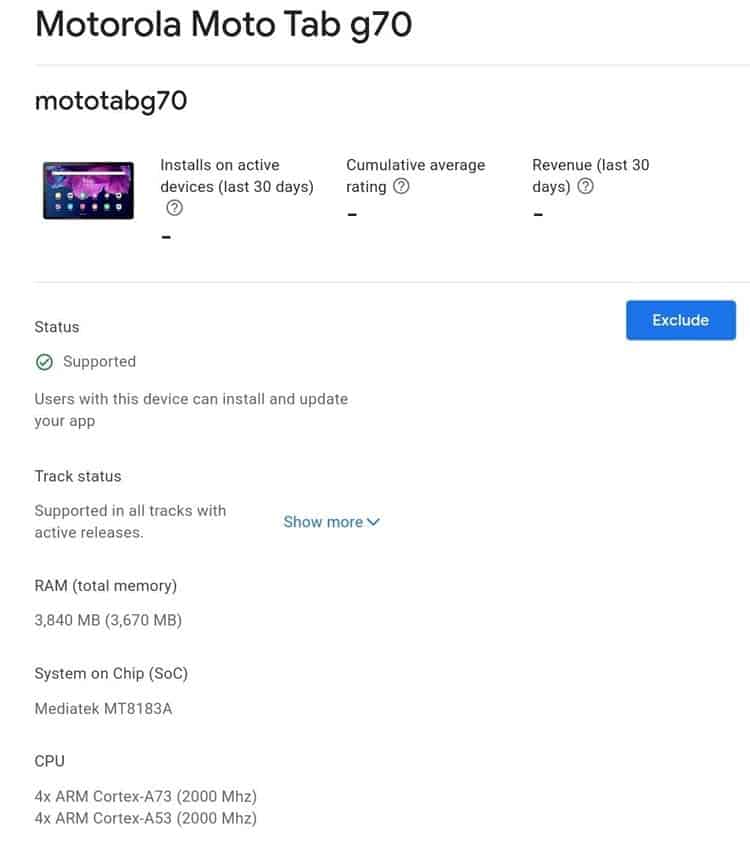 The tablet market in the third quarter

In the third quarter, global tablet shipments were down 15% year-on-year. According to analysts at the Canalys agency, this applies to sales of any tablet computer in all regions of the world, with the exception of the Asia-Pacific. Although the first place in terms of sales is occupied by Apple and Samsung shipments have dropped markedly, the Korean company is still among the leaders.

At the same time, Samsung barely managed to enter the top five computer manufacturers (including tablets) – according to this indicator, it took only the fifth place after Lenovo, Apple, HP and Dell.

Previous Apple patented an external flash for the iPhone

Next Samsung Galaxy S22+ With Snapdragon 898 Leaked In GeekBench 5

Motorola Tab G70 has been revealed in Brazil