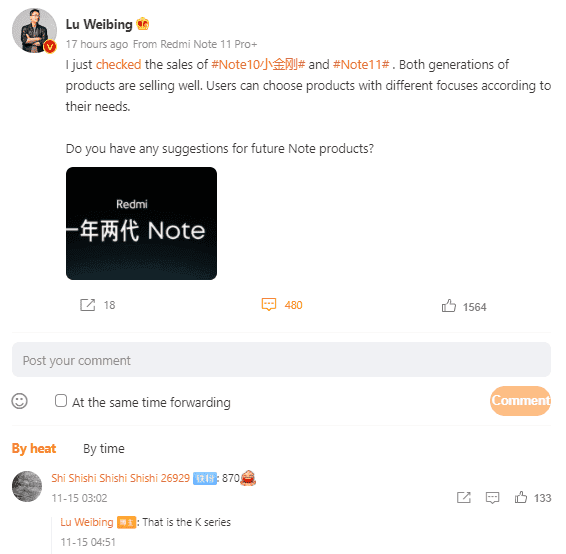 Today, Lu Weibing, the general manager of the Redmi brand, said that he just checked the sales of Note 10 and Note 11, and both generations of products are selling well. He claims that users can choose according to their needs. Lu Weibing then asked Redmi Fans…”Do you have any suggestions for future Note products?”. A Mi Fan left a message “Snapdragon 870”, and this comment rushed to the top of the review. However, Lu Weibing claims that the Snapdragon 870 is not for the Note series. According to him, the K series uses this chip. This means that the Redmi Note 12 series will not use this chip.

The Snapdragon 870 is a very popular chip which combines strong performance and excellent power consumption. Both Redmi and Xiaomi’s products use this chip, specifically Redmi K40 standard version, Xiaomi Mi 10S, etc. According to reports, before the end of the year two Xiaomi /Redmi models with Snapdragon 870 will be released.