Realme GT 2 Pro smartphone’s specifications have surfaced online ahead of launch courtesy of a noted leaker. The Realme GT 2 Pro has been floating around the rumor mill for quite some time now. Moreover, the purported smartphone has been subject to several leaks lately. Some vital pieces of information about the handset were revealed when it passes through multiple certifications websites.

Last month, the Realme GT 2 Pro arrived on the IMEI database carrying model number RMX3301. As expected, the IMEI listing confirmed the moniker. Regrettably, the listing did not shed light on the upcoming smartphone’s specifications. Interestingly, Realme decided to launch a new lineup rather than unveiling smartphones with the Realme X70, X80 monikers. This led to the arrival of the Realme GT 5G. 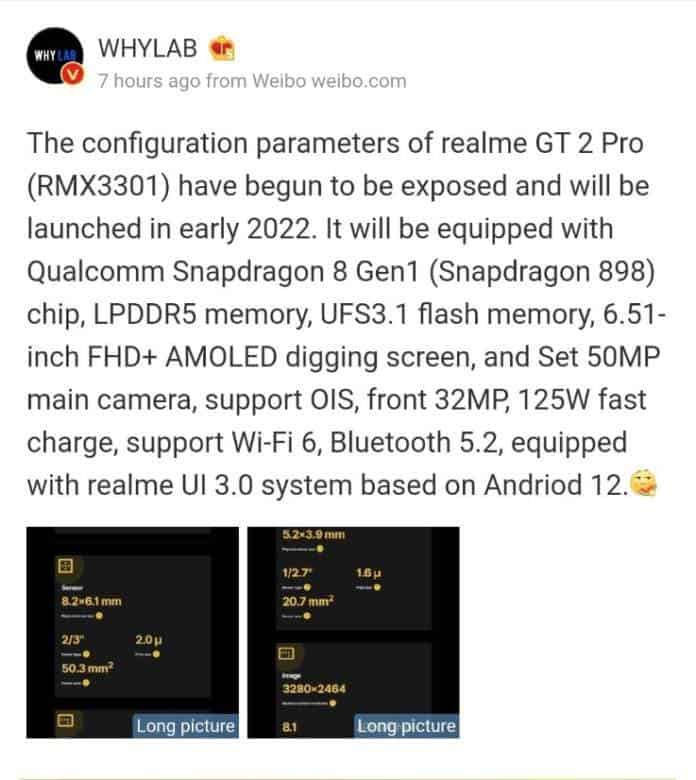 Taking to their Weibo account, noted leaker WHYLAB has shared some crucial information about the Realme GT 2 Pro smartphone. The tipster suggests that the phone will pack a Qualcomm Snapdragon 8 Gen1 (Snapdragon 898) SoC under the hood. To recall, earlier reports suggest that the device will be drawing its power from a Snapdragon 888 SoC, instead. Furthermore, the new leak suggests that the phone will ship with an LPDDR5 RAM and offer UFS 3.1 storage.

According to WHYLAB, the Realme GT 2 Pro (model number RMX 3301) will sport a 6.51-inch AMOLED display with a full-HD+ resolution. Earlier reports claim that the phone will offer an aspect ratio of 20:9, coupled with a high refresh rate and a pixel density of 404ppi. In terms of optics, the smartphone will reportedly house 50MP main camera with OIS (optical image stabilization). Upfront, the phone will sport a 32MP shooter for selfies and video calling.

Moreover, the Realme GT 2 Pro smartphone is likely to support 125W fast charging. Aside from that, it will reportedly use a 5,000mAh battery. Another report suggests that the phone will get 65W charging support. Also, the phone will offer several connectivity options such as Bluetooth v5.2 and Wi-Fi 6. The phone will run on Android 12 OS with Realme UI 3.0 on top.

Another renowned Weibo leaker Digital Chat Station claims that the Realme GT 2 Pro could retail for CNY 4,000. Moreover, DCS suggests that there will be a special edition that would set you back CNY 5,000. Realme has neither confirmed nor denied these speculations.