When Xiaomi started its smartphone business, the company basically had just the online marketing strategy. However, over the past few years, Xiaomi has put more effort into its offline market. The company has opened many offline stores, especially in China and India. In November last year, Lu Weibing, Xiaomi Group’s Vice President and the General Manager of Redmi Brand made a comment regarding Xiaomi Store. He said, “In the coming year, every county will have a Xiaomi Home so that every Mi fan has a Xiaomi home around”. 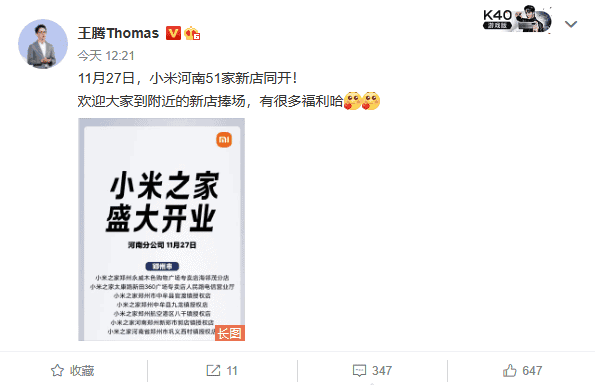 He took to Weibo to announce that Xiaomi will open 51 new stores in Henan at the same time on November 27. The stores will be at Zhengzhou, Luoyang, Nanyang, Xuchang, Zhoukou, Shangqiu, Xinyang, etc. The Xiaomi Stores will also cover various counties and districts. Simply put, the coverage is very wide.

Wang Teng was previously responsible for mobile phone products at Xiaomi. He has appeared at Xiaomi’s mobile phone conferences many times. In March 2020, he joined the Redmi team as the product director. Although the official did not explain the specific reasons for the change of Wang Teng’s position, some analysts believe that Henan is the province with the largest shipment of Xiaomi mobile phones. Thus, this region is of very high value to Xiaomi.

Furthermore, the future seems promising for Wang Teng as he moves from a product engineer to a management position.

Xiaomi Stores now in every province in China

Xiaomi Stores in China is now available in every province in the Asian country. While some stores are specific to certain products (smartphones, Mi Homes, etc) others are mixed. It depends on the market preference in the city or province.

So far, the total number of stores of Xiaomi Stores in China is more than 2,500. For Xiaomi, this is pivotal in its quest for full coverage from city to county nationwide. In addition, Lu Weibing claims that this is just the starting point for Xiaomi. Its next target is to make sure that there is no county without a Xiaomi Store. Xiaomi will work with partners from all over the country to make the Mi Home open to every county in China, and truly realize that “Every Mi Fan has a Mi Home around”.