Since the Mi 8 series, Xiaomi launches Lite models. They have a concrete goal, that is to show a good smartphone could have a low price. In 2022, Xiaomi will continue this strategy in order to showcase the Mi 12 Lite and Mi 12 Lite Zoom are capable of providing good performance but come at a price that you don’t expect. As in previous years, the Xiaomi Mi 12 Lite Zoom is going to be exclusive for the Chinese market. But this should be the only phone in the series with such a specification.

The research and development code name of the Xiaomi Mi 12 Lite is “taoyao”. According to the IMEI database, the two models with the equipment code name “taoyao” are 2203129I and 2203129G.

The entire series will come with the Qualcomm Snapdragon 778G or 780G+ chips. The phones will use a rear three-camera design. Also, the main camera is the Samsung ISOCELL GW3 CMOS. But there are wide-angle and macro lenses as well. Apart from this, we know that they will boast a 6.55″ AMOLED screen with a 120 Hz refresh rate and a 1080×2400 resolution.

In addition, the series will also support under-screen fingerprints.

As for the Xiaomi Mi 12 Lite Zoom, its code name is “zijin” (Forbidden). According to the IMEI database, there is only one device code-named “zijin”. It has model number 2203129BC.

Most of the key features are identical. Say, these handsets will also come with the Snapdragon 778G or 780G+ chips.

Generally talking, the design of the Xiaomi Mi 12 Lite will be very similar to that of the Mi Civi, just like the Mi 12 series. 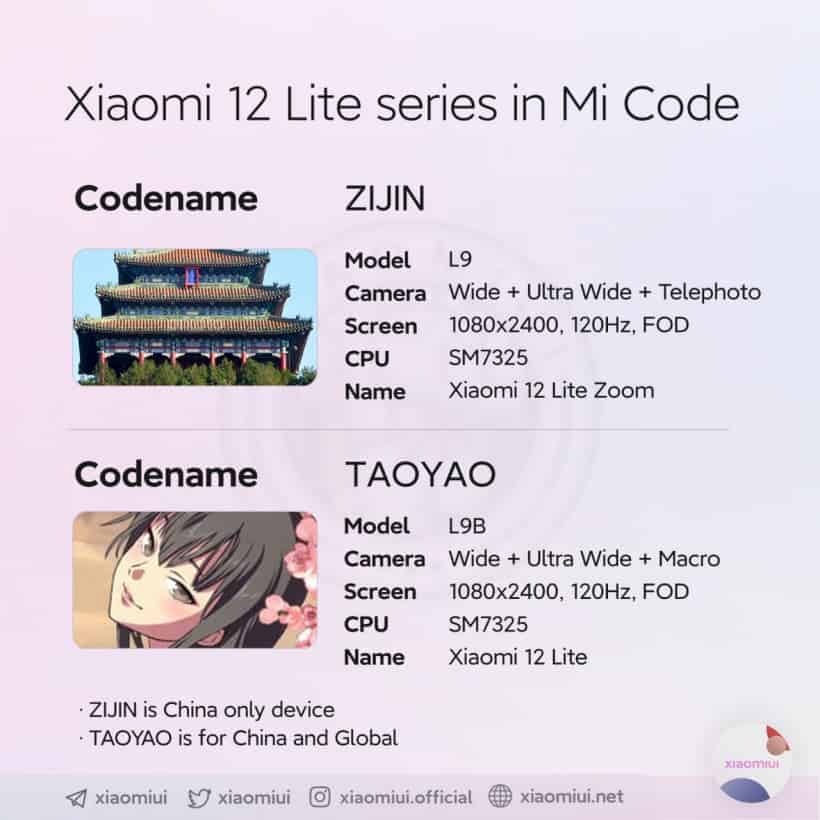 These phones are scheduled to appear on the market along with the MIX 5 series in March. This assumption is based on the “2203” number in the certified model. The latter indicates that it is expected to be launched in 2022/03. Both phones should come with MIUI 13 based on Android 12. Plus, they must receive at least 2 major Android updates.

Next HarmonyOS Will Land In Europe As Soon As Next Year