After floating around the rumor mill for quite some time now, the Oppo Foldable Phone seems to have made its appearance on Geekbench. Oppo is reportedly working on its maiden foldable phone. Despite the lack of an official confirmation, the purported handset continues to show up online in the form of leaks and speculations. According to reliable leaker WHYLAB, the model number of Oppo’s upcoming foldable phone is PEUM00.

An Oppo device carrying the aforesaid model number bagged the MIIT certification not too long ago. WHYLAB shared a screenshot of the MIIT certification on his Weibo account earlier this month. Aside from that, the device has previously arrived on the Camera FV-5 website with key camera specifications. Now, a device with the same model number PEUM00 has passed through Geekbench. As expected, the Geekbench listing divulges some vital information about the purported foldable phone.

If the Geekbench listing is anything to go by, the Oppo Foldable Phone with PEUM00 model number will use a Snapdragon 888 processor. This information coincides with previously leaked specifications of the phone. Furthermore, it suggests that the phone will ship with 12GB of RAM. The alleged foldable phone will run Android 11 out of the box. 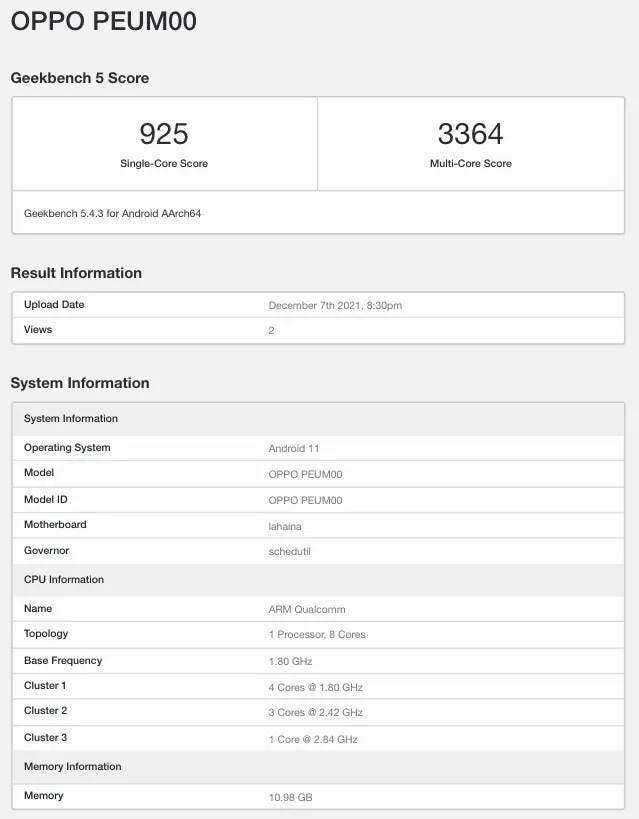 The aforesaid 8.1MP sensor will be delivering a resolution of 3280×2464 pixels. Aside from that, it will come with an f/2.4 aperture and support EIS. Moreover, the front-mounted camera will probably capture 32 megapixels images. Earlier reports also claim that the foldable phone will sport an 8-inch OLED display that offers a high refresh rate of 120Hz. Furthermore, it could adopt an in-ward folding design similar to the Galaxy Z Fold 3.

Moreover, the Oppo Foldable Phone will be drawing its juices from a 4,500mAh battery. According to a past leak, the phone’s battery will support 65W fast charging. Regrettably, details about the Oppo foldable phone launch date are still scarce. However, some reports claim that the device could go official in China on December 14 at the Oppo Inno Day 2021 event.