Chinese manufacturing giant, Xiaomi, is one of the leading brands when it comes to charging technology. A recent report shows that the company has developed a “new era” battery that will enter mass production in the second half of the year. This battery uses premium silicon negative electrodes. Xiaomi’s new-generation battery technology uses a battery-level high-silicon lithium supplement technology. This is the first time that smartphone batteries will use this technology. The battery increases the silicon content and the battery capacity increases by 10%. Despite the capacity increase, the volume of the battery remains the same, and the battery life increases by 100 times. According to speculations, the Xiaomi MIX 5 may be the first Xiaomi device to use this battery. 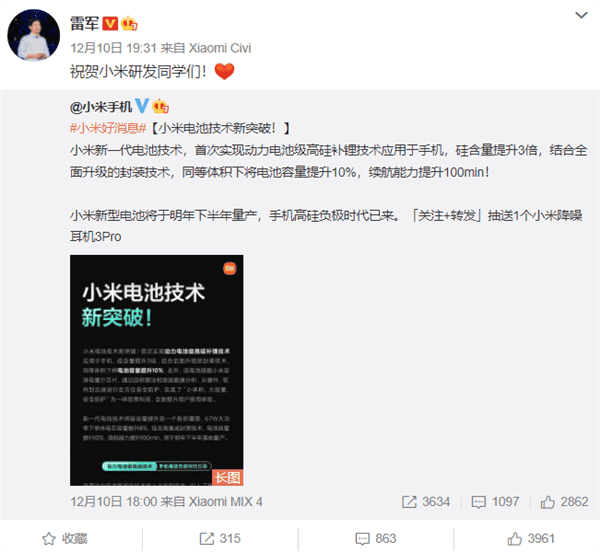 In addition, the battery is equipped with Xiaomi’s surging fuel gauge chip. Through self-developed algorithms and underlying data analysis, the chip has comprehensive security protection on its hardware, software, and even cloud services. This comprehensively enhances the user experience.

This battery will enter mass production in the second half of next year. This is about the launch period of the Xiaomi MIX 5. Thus, there are speculations that the Xiaomi MIX 5 may launch this technology.

In recent years, Xiaomi has made continuous breakthroughs in charging and battery technology. At the beginning of this year, Xiaomi announced its self-developed air charging technology. This technology does not require any touch before charging and there is no need for a cable.

Subsequently, Xiaomi officially announced a magic revamp of the Xiaomi 11 Pro. The upgraded Xiaomi Mi 11 Pro breaks two worlds record. It is the first smartphone to get a full charge in less than 10 minutes. This is because it uses a 200W wired fast charging technology. It also hit 120W wireless charging capacity for the first time. The 120W ultra-fast wireless flash charging can charge from 0% to 100% in just 15 minutes.

This new battery adds a higher proportion of silicon material to the negative electrode. However, it uses the traditional mobile phone silicon oxide negative electrode. The silicon content of the battery is three times, so as to obtain a higher energy density. This can make the energy density of the fast charging battery as high as 740Wh/L. At the same time, it can also solve the problems of low first efficiency, high expansion, and cycle attenuation that are gradually amplified as the silicon ratio increases.

It is important to note that there is no confirmation that the Xiaomi MIX 5 will launch this technology. We will have to wait for more information to hit the web.