Samsung continues to update its lineup and is preparing to unveil a successor to the Galaxy A52. In the first quarter of next year, the Galaxy A53 will premiere and not so long ago we saw renders showing the design of the new product. Now this smartphone has visits the Geekbench synthetic benchmark database.

In the benchmark, the model is SM-A536U and it runs on a hardware platform with model number s5e8825. What kind of chipset it is, we do not know for certain, but judging by the configuration of the cores and their clock frequency, we are talking about the Exynos 1200 with the Mali-G68 video accelerator. Among other things, the smartphone has 6 GB of RAM and the Android 12 operating system. According to the results of the single-core test, the Galaxy A53 was able to score 686 points; and in the multi-core test – 1874.

According to rumors that have appeared on the network, the Galaxy A53 will be equipped with a 6.5-inch FullHD + display with a 120Hz refresh rate, a 5000mAh battery with 25W fast charging. Among the advantages of the device is the protection against dust and moisture according to the IP67 standard. The main camera will be quadruple and the main one will be a 64-megapixel sensor. The Galaxy A53 should be running the Android 12 operating system with the One UI 4.0 proprietary shell. 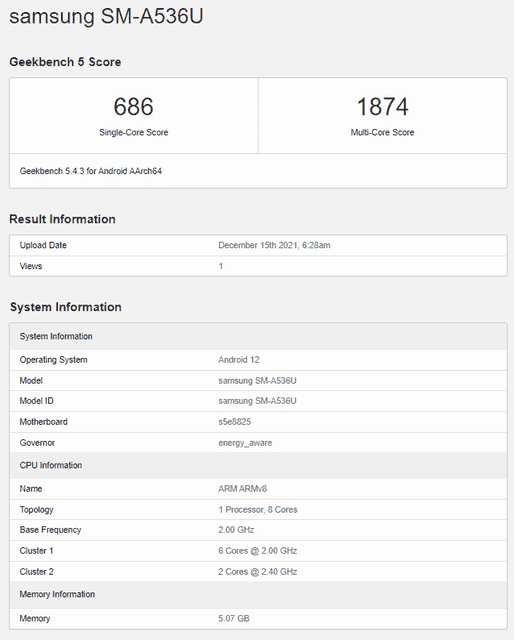 Samsung Electronics, by organizing the merger of the divisions involved in the production of smartphones and household appliances, gave the created business a new name DX. The reorganization will strengthen the corporate structure of the company.

So, DX stands for Device eXperience and reflects the company’s focus on customer needs in various areas of electronics. This was announced by representatives of the South Korean company on Sunday.

Also, the DX team will look for ways to meet demand for a wide range of products, from TVs and home appliances to smartphones and networking equipment, Samsung said in a statement. “ The DX business unit, led by Vice Chairman and CEO Jong-Hee Han; will include visual displays, digital technology, medical devices, mobile communications and networking. The renaming reflects the long-term forward-looking business structure of the company and the strengthening of global leadership;”the company said in a press release.

The company announced a merger between the smartphone and home appliances divisions last week. In addition, this demonstrates the desire of the vice chairman, “crown prince”; and de facto leader of Samsung, Lee Jae-yong; who served a sentence for corruption and was recently out from prison; to become more actively involved in the management of the company.

Samsung Galaxy A53 to come in two chipset variants