Xiaomi has already launched a promotional campaign dedicated to the announcement of the Redmi K50 line. Curious changes await us not only in the devices themselves, but also in the line of models. They promise a powerful chip, a powerful cooling system and ultra-fast charging. In any case, the company itself is distributing just such information about the Redmi K50.

A teaser has been posted on the company’s official Weibo page about the features that we will see in the Redmi K50 series. Taking into account the promised, most likely, such features will be endowed with the top-end Redmi K50 Pro +. So, among the characteristics mentioned is the Snapdragon 8 Gen 1 chipset; which the company calls “the coldest in the industry.”

Apparently, the latest Dual VC cooling system with a large area of ​​action and a double evaporation chamber will allow the new platform to qualify for the title of “the coldest chip”. Among the advantages of the Redmi K50, the teaser mentions the 120W ultra-fast charging technology. A full refueling of the 4700 mAh battery will take only 17 minutes.

For now, that’s all Xiaomi has revealed. Do not forget that the promo campaign has just started and before the announcement of Redmi K50 we will be told more about the new products. This will be done both by Xiaomi itself and by insiders, who are almost certainly now activated. 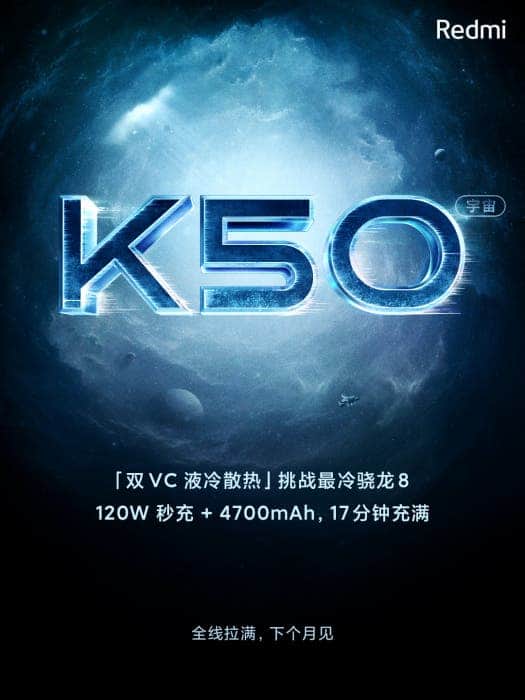 Recently, the Redmi K50 Gaming Edition smartphone has been certified by the Chinese 3C regulator; which has confirmed that the device will support 120W fast charging. Previously, the well-known insider Digital Chat Station was the first to report that the device will receive a 120-watt power supply.

Read Also:  Redmi K50 series with Dimensity 9000 will be launched in March

The insider also claims that the Redmi K50 Game Enhanced Edition will be based on the MediaTek Dimensity 9000 single-chip system. The Redmi K50 Game Enhanced Edition will receive a 2K OLED display; with a frequency of 120 Hz or 144 Hz. It will have four cameras, including a 64MP Sony Exmor IMX686 sensor. A wide-angle sensor OV13B10 with a resolution of 13 megapixels and an 8-megapixel VTech OV08856 will also be available. The fourth sensor will be a 2MP GC02M1 depth-of-field sensor from GalaxyCore. Perhaps there will be another version with a Samsung ISOCELL HM2 sensor with a resolution of 108 megapixels.

The smartphone will receive a large battery, ultra-fast charging, JBL stereo speakers and other flagship features.

Digital Chat Station was the first to accurately report the specifications and release dates of the Redmi K30, K40, Xiaomi Mi 10 and Mi 11.