We are already looking toward new flagship phones that are promised to be launched in the coming months. As for the Android camp, most of them will be powered by the Snapdragon 8 Gen 1 chip. This is the latest creation by Qualcomm and it’s going to provide a true flagship-level performance. But as we know, any device has two ‘components’ – hardware and software. Most of the premium phones sport the same hardware features. And software is where they differ from each other. That’s why all major smartphone vendors spend millions on making their systems smoother and smarter. As a number of new Android smartphones are on the road, let’s take a look at the performance list of the current models. 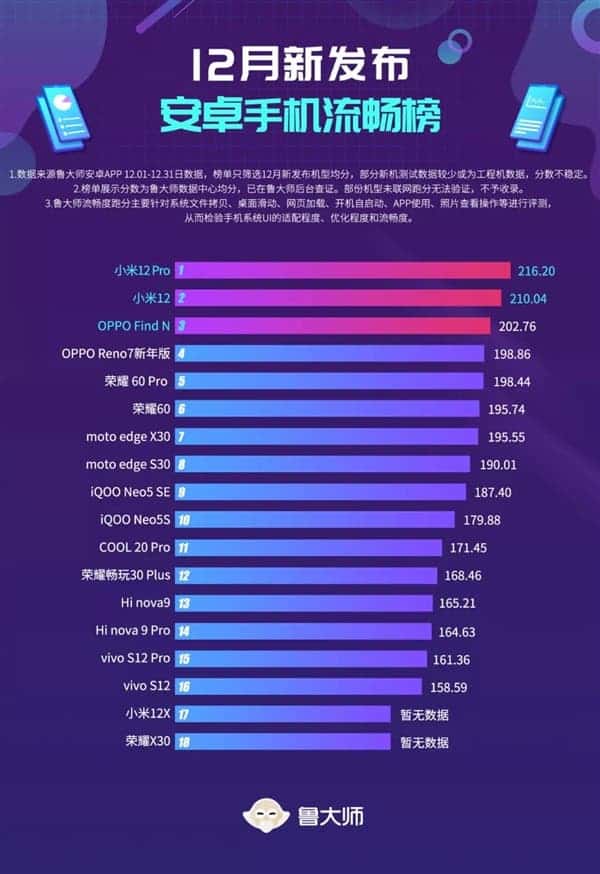 Today, Master Lu released the list (December 2021) of Android smartphones that have the smoothest performance. As we can see, the Xiaomi Mi 12 Pro topped the list with 216,20 points. The second and third positions belong to the Xiaomi Mi 12 and the OPPO Find N. They scored 210.04 and 202.76, respectively.

With the new Snapdragon 8 Gen 1 flagship processor, 120Hz high refresh screen, and the new MIUI 13 system, the Xiaomi Mi 12 Pro once again proved that Xiaomi’s system has almost no equals in the Android camp.

But you shouldn’t think that MIUI has always been on the top of the list. We mean it’s basically MIUI 13’s merit.

MIUI 13 Has A Number Of Advantages

According to Xiaomi’s official introduction, MIUI 13 has been developed keeping in mind that it should be “faster and more stable”. Also, it focuses on optimization of basic functions, including focus computing 2.0, atomic memory, liquid storage, and so on.

By the way, the main idea behind Master Lu benchmark’s performance smoothness test is system file copying, desktop sliding, web page loading, boot-up, app use, photo viewing operations, etc. Thanks to continuous tests, the benchmark platform determines whether a system is smooth or net. For each test, it gives concrete points. And at the end, it calculates the total score.

Next Fire-Boltt Ninja 2 Launched In India, To Go On Sale On Amazon Soon