A few days ago, the November China Smartphone SoC Research Report released by CINNO Research showed that MediaTek once again surpassed Qualcomm and ranks first. As Huawei HiSilicon’s chips are fading, the Chinese mobile phone SoC market has evolved into a battle between MediaTek and Qualcomm. Apple’s A-series chips rely on the strong momentum of the iPhone 13. However, even the strong sales of the iPhone 13 series can not give this chip a position above third place. 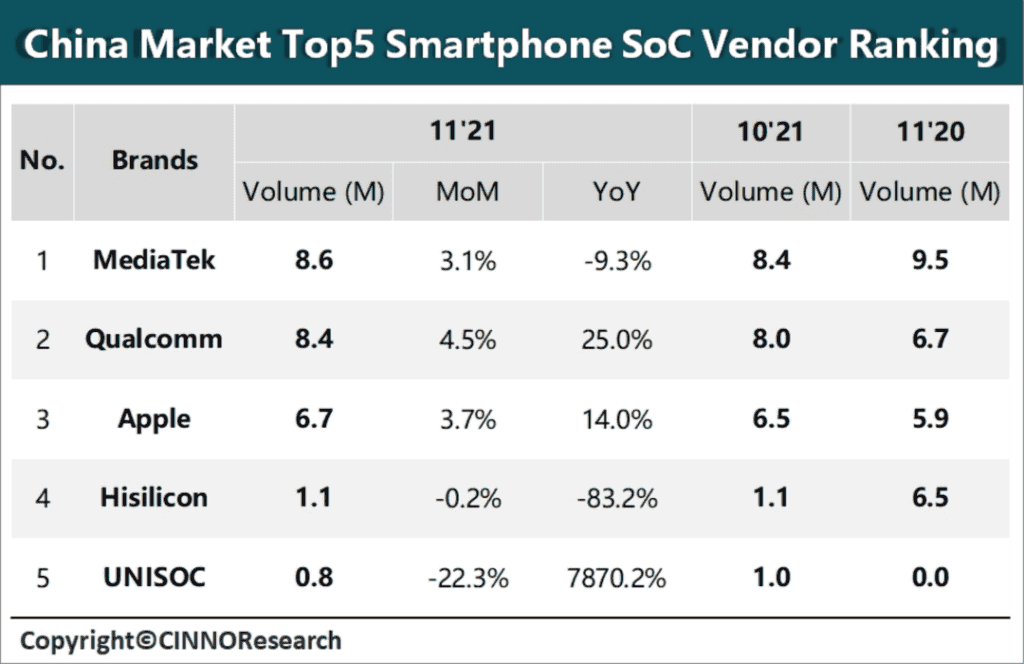 According to monthly data from CINNO Research, in terms of mobile phone SoC in November, MediaTek once again surpassed Qualcomm, ranking first in November with 8.6 million smartphone chip sales. Qualcomm follows closely with 8.4 million sales in the same month. However, we can see that Qualcomm keeps narrowing the sales gap.

Nevertheless, MediaTek will probably put a strong performance with its multiple chips this year. The Redmi Note 11 series comes with Dimensity 920 and Dimensity 820 chips, focusing on the mid-range market. This series is the main driver for the MediaTek Dimensity series chips. Currently, MediaTek Dimensity chip manufacturers are Redmi, Oppo, Vivo, Realme, Huawei, ZTE, etc. The products are mainly positioned at the entry and mid-range end, which is also the main force for sales in November.

In addition, the sales of Apple’s A-series chips are still increasing, ranking third. However, the rapid increase in the past one or two months is now slowing down. Huawei HiSilicon and UNISOC rank fourth and fifth with sales of 1.1 million and 800,000 units respectively. The market share of HiSilicon chips was the same month-on-month, but the year-on-year decline was still huge. CINNO Research analysts said: HiSilicon’s inventory is still unable to predict when it will bottom out, and it still adopts a series of inventory control methods.

In the coming months, there will be significant differences in the outlook of the chip market. The new Snapdragon 8 Gen1 will be a driving force for Qualcomm. However, unlike previous years, MediaTek has the Dimensity 9000 which almost matches the performance of the Snapdragon 8 Gen1. The first smartphones with Dimensity 9000 will be official next month.

MediaTek has been doing quite well in the chip market. It gets most of its revenues from the mid-range and entry-level markets. However, it has some pretty decent flagship processors like the Dimensity 1200 and its latest Dimensity 9000 SoC.

At the end of 2021, MediaTek’s revenue hits $17.6 billion, a new record for the Taiwanese chipmaker. Relative to the previous year, this figure represents a 53% increase. According to Counterpoint Technology Market Research, MediaTek’s sharp revenue growth is due to the rapid development of 5G and Wi-Fi 6 technologies. In addition, investments in energy-saving solutions are bearing fruit.

In the current quarter, MediaTek’s revenue is projected to rise by 2-10% compared to the last quarter of 2021, amounting to $4.7-$5.1 billion. This should be facilitated by the launch of the flagship mobile processor Dimensity 9000. Smartphones running it are in preparation by such major developers as Oppo, Vivo, Xiaomi and others.

Analysts believe that according to the results of the current quarter, MediaTek will become a leader in the smartphone processor market with a share of 39% in unit terms. Second place goes to Qualcomm with a score of approximately 29%.

According to Counterpoint Technology Market Research forecasts, in 2022 the share of 5G devices in the total mass of smartphones sold will reach 54%, or approximately 800 million units. MediaTek will continue to actively invest in related technologies.

No doubt, Qualcomm is the “king” when it comes to flagship processors for Android smartphones. However, it is Qualcomm’s 5G baseband business that is making waves

Apple Bionic processors are far ahead of their Android counterparts. These processors boost the performance of Apple’s smartphones. Its latest Bionic A15 processor excels in overall performance. Apple Bionic A15 chip adopts a design architecture of 2 large cores + 4 small cores in the CPU part. This improves performance by 20% and energy efficiency by 30% relative to the A14 chip. On the GPU side, the A15 chip adopts a 5-core architecture, which increases the number of GPU cores.

UNISOC Tiger chips are mostly entry-level and at best mid-range chips that appear mainly on Chinese smartphones. Considering that there are not many chipmakers globally, UNISOC has a spot on the top five list.