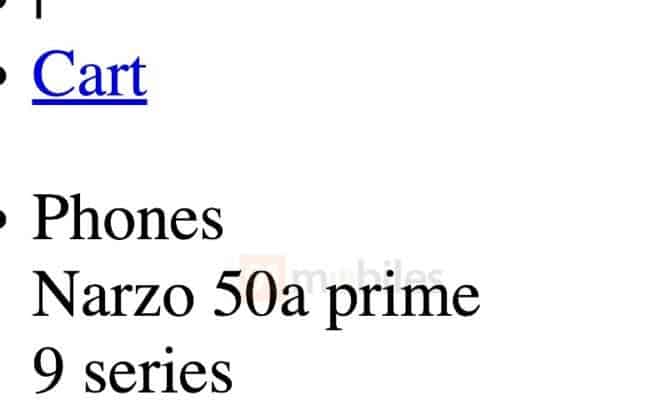 Regrettably, the Realme Narzo 50A Prime listing on the company’s India website does not shed light on the smartphone’s specifications. However, it is a sign that the phone is coming to the Indian market soon. Despite the lack of official confirmation, MySmartPrice suggests that the Narzo 50A Prime could launch in India either in January or February 2022. Also, the publication claims that the phone could retain several specs of the Narzo 50A. The phone will probably sport an IPS LCD and house three rear-mounted cameras.

The Narzo 50A sports a 6.5-inch IPS LCD with HD+ resolution, and a water-drop notch for the front shooter. Moreover, the screen offers 570 nits of peak brightness, coupled with a screen-to-body ratio of 88.7 percent. The rear panel features a 50MP main camera, along with a 2MP macro camera, and a 2MP depth camera. Upfront, the phone houses an 8MP shooter for selfies and video calling. The phone has a robust 6,000mAh battery with 18W fast charging support. However, it still weighs 207 grams. The phone’s dimensions are 164.5×75.9×9.5mm.

A powerful MediaTek Helio G88 chipset is available under the hood, along with a competent Mali-G52 GPU. Furthermore, the phone ships with 4GB of RAM and offers up to 128GB of onboard storage capacity. Aside from that, the budget smartphone features a microSD card slot for storage expansion. The device boots Android 11 OS with Realme UI 2.0 on top. The rear panel also houses a fingerprint scanner. Moreover, the phone supports the face unlock feature. For connectivity, it has options like a USB Type-C port, Bluetooth 5.0, GPS, WiFi 802.11 b/g/n, and 4G VoLTE.

Realme Narzo 50A Prime will launch on April 25