Over the past few weeks, there have been several reports regarding the upcoming Redmi K50 series. The first model in the Redmi K50 series will be official in February. As one of the most cost-effective Android flagship phones, this series is also highly anticipated. Presently, there are three models whose core processors can be identified so far. The first is the entry-level Redmi K50. As a budget model of this series, the Redmi K50 will come with the Snapdragon 870 SoC as the old model. This smartphone also comes with a side fingerprint sensor, as well as an OLED screen with a center punch-hole. 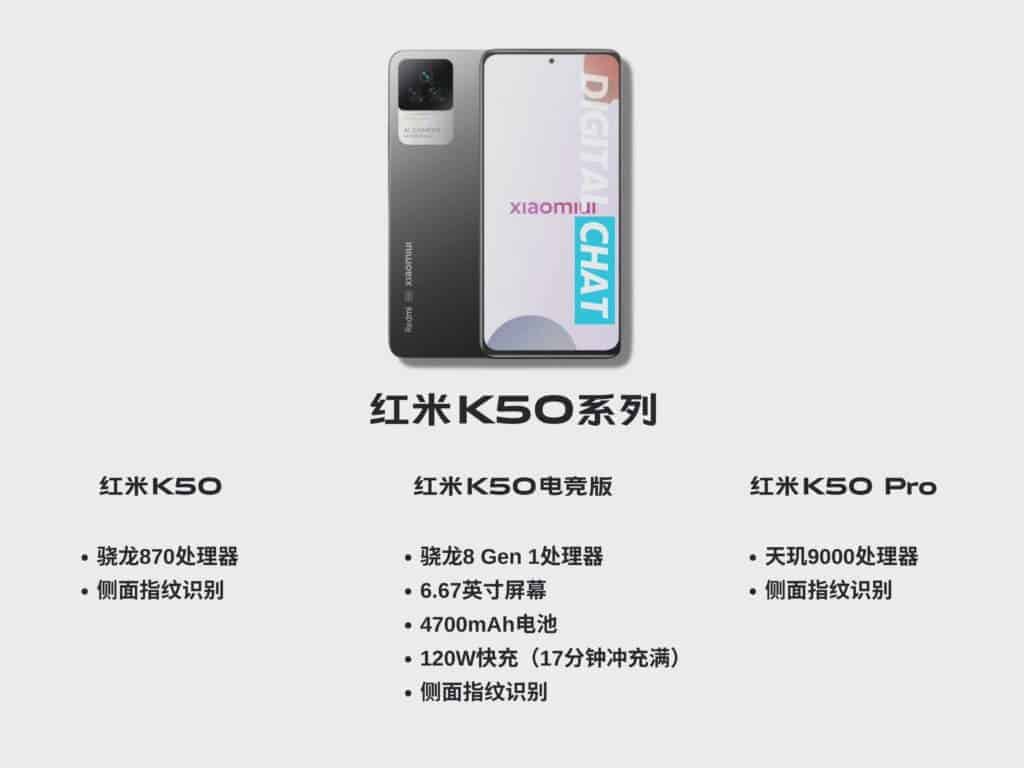 The Redmi K50 gaming edition (or e-sports version) will be official next month. The Redmi K50 gaming edition will use a center punch-hole straight screen. The right fuselage will retain the physical shoulder button, which can bring a stronger game control experience. Furthermore, this smartphone will come with a 6.67-inch display. Under the hood, it will use the flagship Snapdragon 8 Gen1 SoC. In addition to the core performance, the charging speed of the Redmi K50 gaming edition is also very good this time. Although it has a built-in 4700 mAh large-capacity battery, it will come with a 120W Immortal Second Charge Pro. This charging capacity will deliver a full 100% charge in 17 minutes. This is the fastest charging speed in the history of Redmi.

We will also have the Redmi K50 Pro which will come with the Dimensity 9000 processor. This chip also uses a 4nm manufacturing process but from TSMC. The performance output of this chip is no weaker than that of the Snapdragon 8 Gen1. According to previous news, the K50 series will use a 2K resolution high refresh screen for the first time.

It is worth mentioning that in addition to these models, there are also reports of the Redmi K50 Pro+. However, there is really no report on the specification of this smartphone.

Furthermore, the Geekbench listing reveals that the phone will use an octa-core processor codenamed taro. This processor will have a 1 + 3 + 4 core configuration, coupled with a peak clock frequency of 3.0GHz. In other words, the Redmi 21121210C could pack the Qualcomm Snapdragon 8 Gen 1 processor under the hood. This speculation aligns with an earlier report that suggests the Redmi K50 series will be the most affordable phone to come with the Snapdragon 8 Gen1 SoC.