Amazon Italy accidentally launched a sales page for the Samsung Galaxy Tab S8 Ultra. The page contains all the relevant information about this device including the price. Of course, the page has long been deleted but not before screenshots were taken. The information on the page shows that the Samsung Galaxy S8 Ultra 5G version will sell for 1308.1 euros ($1,484). This is the price for the 128GB storage option of this device. However, since this tablet also has 256GB, 512GB, and other high-end versions, there is almost no suspense in the price.

In terms of core configuration, the Samsung Galaxy Tab S8 Ultra uses a 14.6-inch notch screen with a resolution of 2960 × 1848 and a refresh rate of 120Hz. It is equipped with a Qualcomm Snapdragon 8 flagship processor. Furthermore, this device supports a huge 11,200 mAh battery and supports Dolby Atmos.

It is worth noting that Samsung will also launch the Galaxy Tab S8 and Galaxy Tab S8+ at this conference. However, only the Galaxy Tab S8 Ultra has a notch design. This is a high-end device that will compete with Apple’s iPad Pro. The other two are conventional and comprehensive displays without a notch. The high-end flagship tablet will be officially released in February, on the same stage as the Galaxy S22 series.

If previous reports are anything to go by, the Tab S8 Ultra will sport a rectangular screen and a slim notch. Aside from that, it will feature slim bezels and a fingerprint sensor that’s embedded into the screen. Furthermore, the tablet will support Dolby Atmos sound. It will reportedly feature a 14.6-inch Super AMOLED display that provides a QHD+ (3200 x 1800 pixels) resolution and 251ppi pixel density. The rear panel will have a magnetic strip that holds the S Pen.

The word on the street is that the Galaxy Tab S8 Ultra will house two cameras. These include a 13MP main camera and a 5MP ultra-wide sensor. Moreover, the tablet will have an 8MP shooter for selfies and video calling. Aside from that, it is likely to come with a 5MP ultra-wide lens. Under the hood, it will pack an Exynos 2200/Snapdragon 8 Gen1 (Snapdragon 898) chipset. The device will ship with 12GB of RAM and offer up to a hearty 512GB of onboard storage. 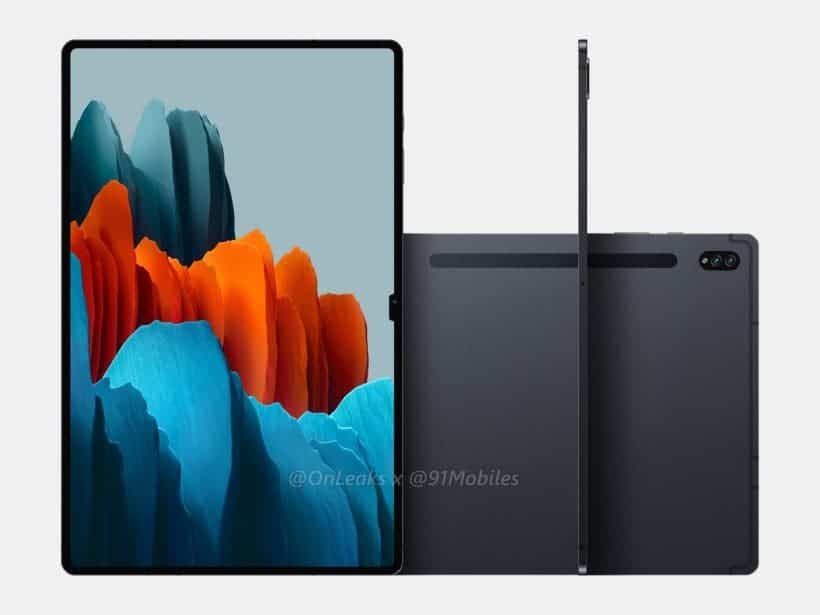 On top of that, the Galaxy Tab S8 Ultra tablet is likely to run Android 12 OS. It will probably draw its juices from an 11,500mAh battery that supports 45W fast-charging. It will offer multiple connectivity options including a Type-C port, Bluetooth 5.0, Wi-Fi 6, and 5G. Details about the tablet’s price and availability are still scarce. However, it could retail for around INR 70,000 if the leaked specs turn out to be true.

Previous Godeal24 Winter Sale is coming, get Windows 11 for exactly $0

Next Redmi K50 series may not increase its starting price