Honor is back since the last year as an independent brand and many will think it’s the new Huawei. The fact is that the former sub-brand is taking a ride in the legacy created by Huawei and is simply upgrading consolidated lineups and launching new devices to conquer China. In fact, the strategy is paying off, as Honor quickly became one of the most popular brands in China. It also returned to global markets with a few handsets, something that Huawei struggles to do nowadays. Apparently, Honor is preparing a new smartphone for its Honor 60 series, the Honor 60 SE.

A new Honor smartphone made an appearance on Geekbench’s database with the model number GIA-AN00. The device is believed to be the Honor 60 SE. Unfortunately, the information regarding this handset is rather scarce at the moment. But the listing alone is enough to give us some clues about it.

The upcoming Honor 60 SE ran Geekbenck with a MediaTek Dimensity 900 SoC in tow. To those unaware, this platform is below the Dimensity 1200 and Dimensity 1100 but still has similar specifications. It has two ARM Cortex A78 cores clocked at up to 2.4 GHz and six ARM Cortex A55 cores clocked at up to 2 GHz. The handset has a Mali-G68 MC4 GPU which can handle certain games without any hassle. The device in question passed by Geekbench with 8 GB of RAM. Of course, we can expect other RAM options at the launch. The listing also suggests Android 12 straight out of the box, which is certainly a plus when companies are still launching Android 11 phones. 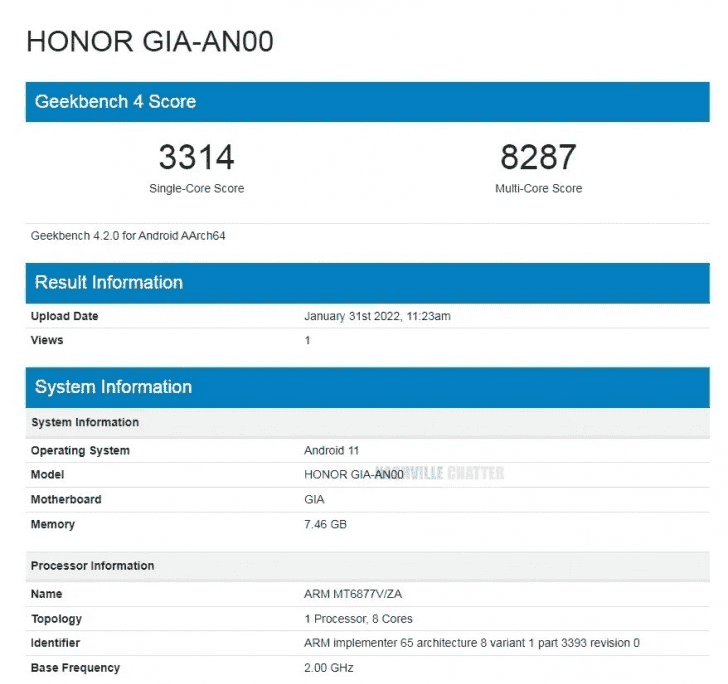 The handset scored 3,314 points in the Single-Core tests and 8,287 in the Multi-core department. These results are quite high, and the answer comes from the fact that it was made on Geekbench 4.

Putting the specifications aside, the report suggests it’s the Honor 60 SE. After all, that’s the remaining device for the Honor 60 series. As usual, we may expect the brand to disclose it first in the Chinese market. However, a global launch may appear soon after that.

Honor is quite busy with preparations for its 2022 round of smartphones. The brand is expected to reveal new flagship smartphones featuring Dimensity 9000 and also the Snapdragon 8 Gen 1. The company also unveiled the Honor Magic V earlier this month as its first smartphone for the foldable segment. We won’t be surprised to see Honor taking Huawei’s former position.

It seems reasonable to think the Honor 60 SE coming in the next month. After all, for March and later months we expect the company to shift its plans for the Honor 70 series.