Much to the delight of Futurama fans, the adult animated sci-fi comedy series has been revived at Hulu. Nearly ten years after going off-air, Futurama is set to return with multiple original cast members. After negotiating for several months, Hulu has finalized deals for twenty episodes of the cult animated sci-fi comedy created by Matt Groening. As part of the Hulu deals, Futurama will be premiering in 2023 on the popular streaming platform.

Some of the series’ popular voice cast including David Herman, Phil LaMarr, and Lauren Tom will come back. Aside from them, Maurice LaMarche, Tress MacNeille. Katey Sagal and Billy West will be making their comebacks as well. However, the aforesaid list does not include John DiMaggio, who is one of the three lead voice actors. DiMaggio voices the indecent robot Bender. Aside from that, he voices a myriad of other characters. Before the first table read on February 14, the role is in  recasting process

John DiMaggio Could Reprise His Role

This decision came after the negotiations between DiMaggio and Futurama studio 20th Television Animation came to a halt. Nevertheless, both sides want him to rejoin the cast to reprise his iconic role. An insider familiar with the project claims the producers believe DiMaggio will return If this speculation proves to be true, the Bender will return. Moreover, sources claim that DiMaggio was approached alongside the rest of the cast.

Thanks for the concern and the props, everyone. I really appreciate it. Don’t worry, I’ll keep you posted, but until then… CHEESE IT! #bendergate

Furthermore, the sources suggest that the offer to DiMaggio was similar to the one for the other two lead voice actors, West and Sagal. While his fellow leads finally agreed to the deal after a back-and-forth, DiMaggio felt the proposal did not justify the skyrocketing popularity the original series garnered.

Twenty new episodes of Futurama will be running in a couple of batches. For those who are unaware, this is the third revival of the hit series. Also, it is the third fan-favorite Fox animation series that’s making a comeback. To recall, the network decided to revive Family Guy following impressive DVD sales. Likewise, American Dad! found a new life due to its huge success on TBS. Futurama originally aired on Fox from 1999-to 2003. However, the network discontinued it midway in production on Season 4. 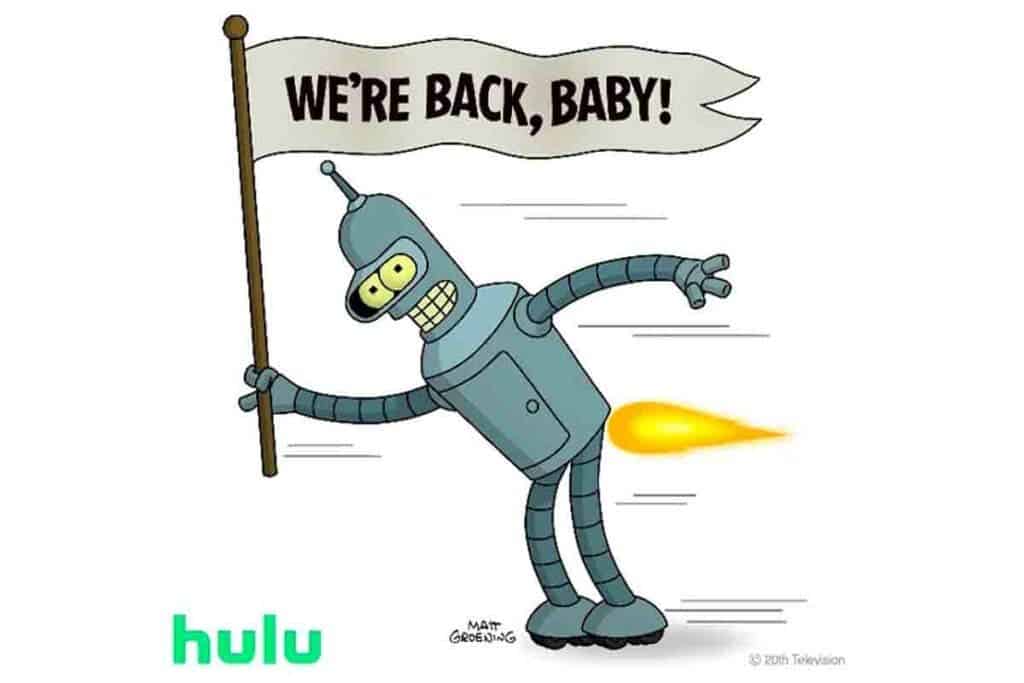 The series made its come back in 2007, comprising four direct-to-DVD movies that were eventually available on Comedy Central as 30-minutes episodes. Considering its success, Comedy Central aired new seasons of the series in June 2010. Regrettably, the network canceled it again after three years. “I’m thrilled to have another chance to think about the future… or really anything other than the present,” Cohen explains.

Groening excitedingly announced the return of Futurama again. The current seasons of Futurama are available on Hulu for streaming. The President, Hulu Originals, and ABC Entertainment, Craig Erwich says the network couldn’t wait to bring new episodes of the beloved series. Erwich noted that the network is looking forward to Matt and David establishing Hulu as the premier destination for the fans of the adult animation genre.

Futurama has bagged six Emmy Awards. Two of these awards are under the Outstanding Animated Program category. Moreover, the series has a whopping seven Annie Awards, two WGA Awards, and two Environmental Media Awards It has seven seasons that spans across two decades, with 140 episodes being produced. The then-final episode was aired on September 4, 2013. The series revolves around the life of a 25-year-old pizza delivery boy, Philip Fry. The series’ developers are Groening and David X. Cohen, and its creator is Matt Groening.