Last year, Qualcomm and MediaTek introduced new processors that have become widespread in smartphones. Competition has intensified on the market and there is no shortage of interesting models to choose from. For someone in this situation, it would be appropriate to know which smartphones are the most powerful on the market. After all, everything is known in comparison.

And here the AnTuTu benchmark comes to the rescue, the developers of which publish their ratings of the top powerful smartphones on an ongoing basis. We have already introduced you to the top 10 for the Chinese market, and now it’s time to learn about the balance of power in the global smartphone market in January 2022.

If the Chinese chart of the most productive flagships already has a total dominance of devices with Snapdragon 8 Gen 1, then this trend will come to the global market a little later. Now the leader of AnTuTu top smartphones is Xiaomi 12 Pro, the only representative of the new generation of top devices with Snapdragon 8 Gen 1 in this ranking. It did not jump to the coveted mark of 1 million points, showing a result of 979,499 points.

After Qualcomm released the new generation of Snapdragon 8 processors in early December last year, the first mobile phone equipped with this chip soon went on sale. Phones equipped with Snapdragon 8 Gen 1 chip also appear on the Global Android phones performance list in January, and not surprisingly, become the champion.

The remaining nine places in the top 10 were taken by last year’s flagships based on Snapdragon 888/888+. So, the second and third places are for the gaming Nubia Red Magic 6 and Asus ROG Phone 5s Pro. Nubia Red Magic 6R managed to get to the fourth position, leaving realme GT behind. Asus ROG Phone 5, iQOO 7, OnePlus 9 Pro, Samsung Galaxy S21 Ultra and OnePlus 9 follow. 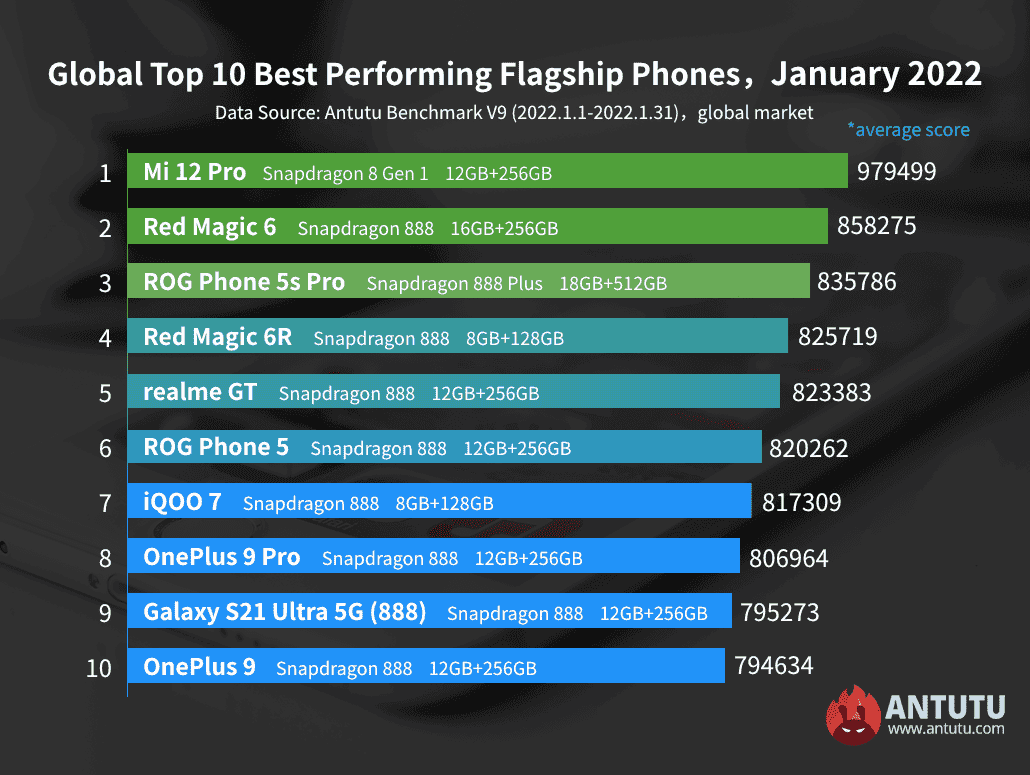 By tradition, according to AnTuTu, the most powerful smartphones are also chosen among the devices of the mid-range segment. And here there are more similarities with the Chinese chart. The first lines of the rating were taken by models with Snapdragon 778G and Snapdragon 780G. The top three looks like this: iQOO Z5, Realme GT Master and Xiaomi Mi 11 Lite. Models with Snapdragon 778G took the fourth to seventh place. Xiaomi Mi 11 Lite NE, Honor 50, Samsung Galaxy A52 s 5G and Galaxy M52 5G. Vivo V23 5G with Dimensity 920 is in eighth place; iQOO Z3 with Snapdragon 768G is in ninth place; and Oppo Reno6 5G with Dimensity 900 processor is in the top ten. 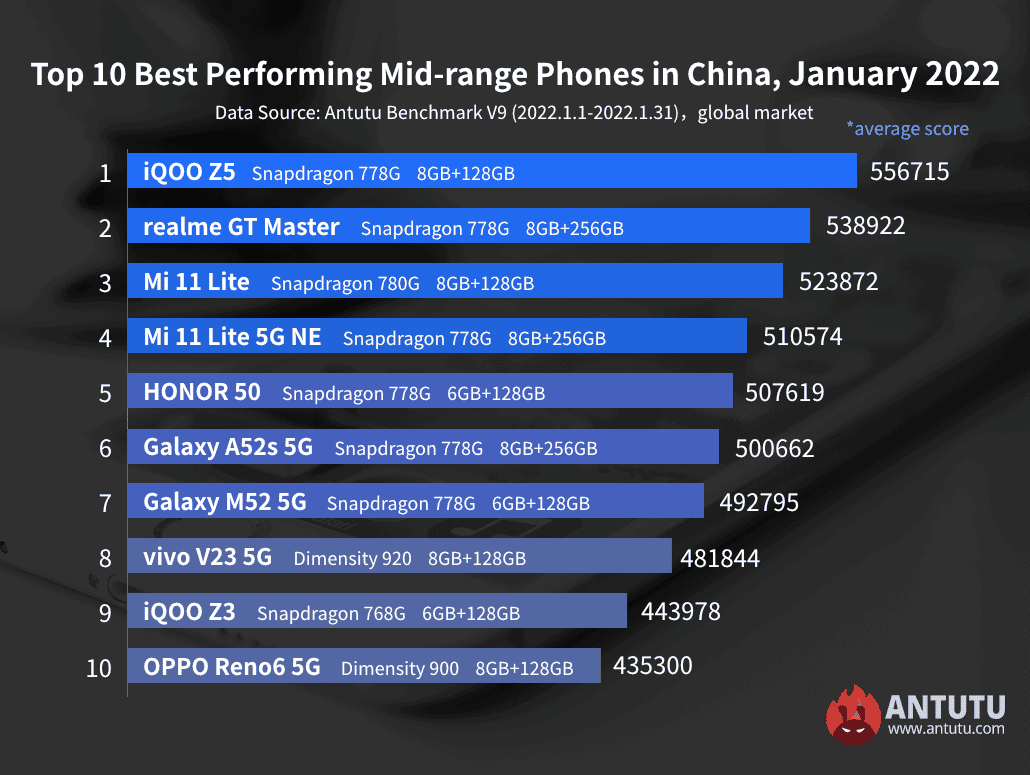 Previous Xiaomi, Samsung, OnePlus and more will implement Material You

Next Official: Samsung Galaxy A series will get four Android updates

AnTuTu: the best Android smartphones in terms of price/performance