Apple has definitively set a new standard for laptops and overall computers with the release of its first in-house made silicon, the Apple M1. The company ditched the Intel processors on its laptops and computers in favor of ARM-based chips. Although we don’t think that the x86 computers will be gone in the next few years, we can see that more and more manufacturers are considering a new range of products with ARM-based chips. However, not all of them will go Apple’s route of building a proprietary chip. Instead, they will rely on third-party system-on-chip manufacturers like Qualcomm. As per a new report, Microsoft is preparing a new laptop that users the cutting-edge Snapdragon 8cx Gen 3.

Microsoft is one of Apple’s biggest competitors in the United States and in the entire world. The company behind Windows also wants to build a solid ecosystem of ARM-based computers and it is partnering with Qualcomm for such feat. The mother of Snapdragon chips has expertise with ARM-based processors and has been investing in the Snapdragon 8cx series for computers in recent years. Qualcomm wants to expand its presence into computers, and Microsoft certainly is the perfect partner for this. 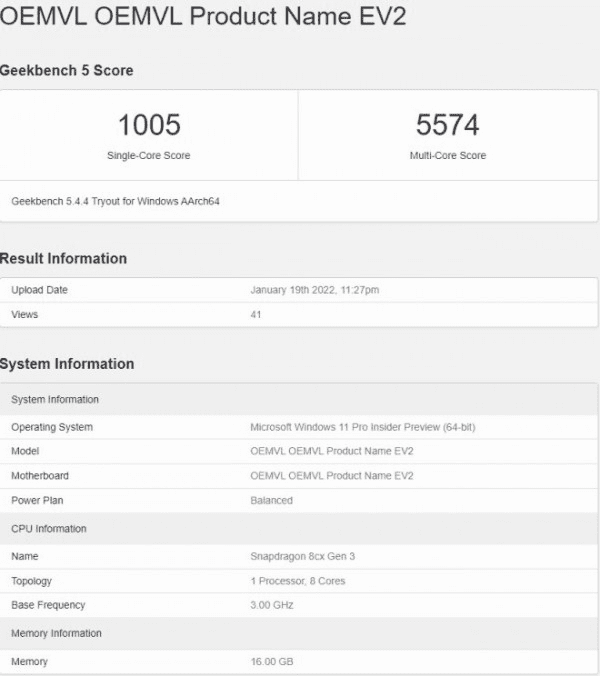 The upcoming Microsoft laptop passed through the Geekbench benchmark with OEMVL OEMVL Product Name EV2. Interestingly, this mouthful name falls in line with previous codenames of Surface devices. The “EV2” designation, meanwhile, suggests that the product is already in the hardware testing stage. In this stage, the manufacturer is testing the hardware to make sure there isn’t any malfunction. After this stage, it will finish the external and internal design. As a result, we can say that Microsoft’s upcoming Snapdragon 8cx 3-powered computers shouldn’t be much away from a release.

Read Also:  Windows 11: Microsoft wants to add a search bar on the desktop

According to the Geekbench test, the Snapdragon CPU can go against the 25W-rated Intel and AMD processors. At least when it comes to the multi-core performance. The processor achieves 1,005 points in the single-core tests and 5,574 in the multi-core department. When it comes to the single-core performance, the Snapdragon 8cx 3 seems to be still behind the competition. Anyway, there is still room for improvements as this isn’t a finished product.

For now, we should digest this with a pinch or two of salt. Microsoft is still in the testing phase, and the product should still be a few months away. We assume it will be part of the Surface lineup and will come with Windows 11 straight out of the box as Geekbench clearly suggests.

Windows still play a big role in the company’s total revenue. The company’s new Operating System will be also an important step for the company in direction of ARM-based computers, in a recent development, the brand decided to not restrict third-party apps on its OS.

Next OnePlus Nord CE 2 will get two major Android updates, but there's a catch