POCO has just unveiled the POCO M4 Pro 5G in India. The device was unveiled in global markets in November last year as a rebadged Redmi Note 11 5G, India, on other hand, got the same device rebadged as Redmi Note 11T 5G. Now, the customers have two devices that are pretty similar except for the design. It’s becoming hard to follow Xiaomi’s strategy with all these rebrandings here and there. Apparently, things will become even more confusing in the upcoming weeks. POCO is gearing up to introduce a 4G variant of this handset, that probably will be marketed as POCO M4 Pro 4G. The device seems to be just a rebadged Redmi Note 11S with the MediaTek Helio G96 SoC.

The POCO M4 Pro 4G made two appearances at the Geekbench database in two distinct regional variants. Now, the device gives one step further onto its launch. It has received approval from Google Play Console, which means it’s attested for running Android and Google’s store of applications. Worth noting, that this is for the global variant. The device that passed through the Google Play Console listing carries model number 2201117PG. The device will launch in multiple markets and there is also a version dubbed 2201117SI. The listing also confirms all our suspicions, the device has codename fleur, which is just the same as the Redmi Note 11S. The device’s front panel is also revealed, but honestly, it looks like any other Xiaomi smartphone in the market right now. Of course, it has a slightly thick chin bezel which is a trademark of low-end smartphones. 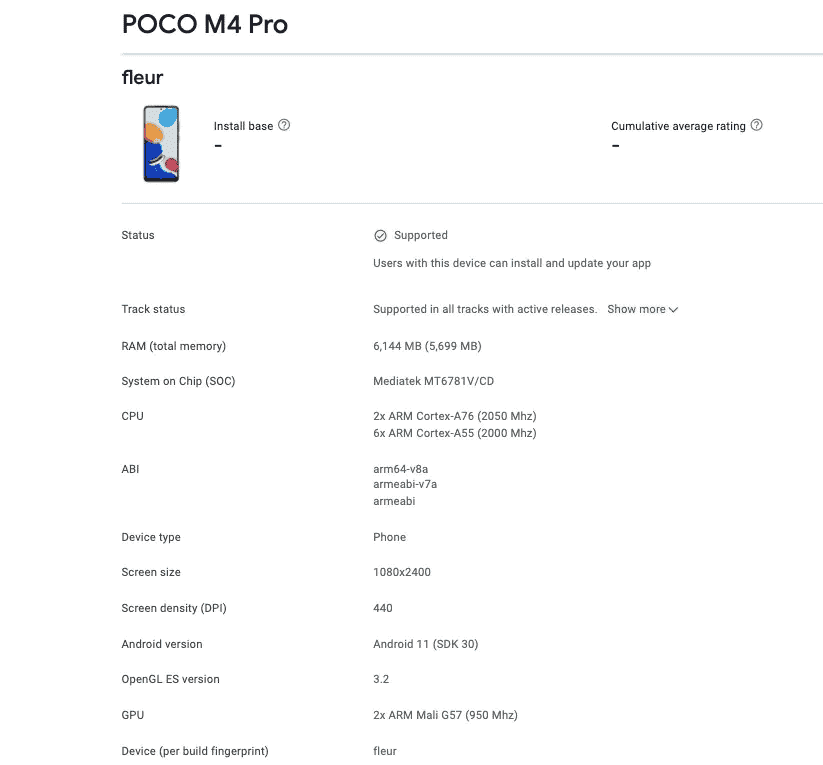 Under the hood, the POCO smartphone draws its powers from MediaTek MT6781V SoC as per the listing. To those unaware, this is essentially the MediaTek Helio G96 SoC. It comes with 6 GB of RAM. However, we’re also expecting variants with 4 GB and even 8 GB of RAM. In terms of storage, it should start with 64 GB and go up to 128 GB. The Google Play Console listing also confirms the Full HD+ display with 2,400 x 1,080 pixels. If the device is a 1:1 copy of the Redmi Note 11S, we expect the panel to be an AMOLED one with at least 90 Hz refresh rate. The handset also comes with Android 11 out of the box, which is a trademark of the recently released Redmi Note 11 series.

The device will also get a Quad-Camera setup. We expect a primary 108 MP snapper, an 8 MP ultrawide camera, and two 2 MP sensors for depth and macro shooters. For selfies and video calls, the device gets a 16 MP selfie snapper. Last but not least, it draws its powers from a massive 5,000 mAh battery with 33W fast-charging support.

Previous Realme Narzo 50 specs and price have been revealed

POCO M4 Pro 4G teased by the company ahead of launch