When Realme unveiled the Narzo 50 series, it left the vanilla Realme Narzo 50 out of the party. Now, however, the company is fixing its mistake with the release of the new handset. The brand has scheduled an event for February 24. After bringing the Realme 9 Pro and Realme 9 Pro+ for the upper mid-range segment, the brand will introduce a new budget offering for those who don’t need 5G just yet. Ahead of the launch, the company has set the landing page on Amazon India. It confirms a few tidbits about the device such as the MediaTek Helio G96 SoC and the 120 Hz refresh rate screen.

Now, a new report from the folks at RMLeaks comes to reveal the full specifications of the handset. The report also goes further giving the pricing information for the Indian market. The Realme Narzo 50 should be a competitive smartphone for those who don’t need a 5G SoC just yet but want a decent experience.

According to the report, the Realme Narzo 50 will pack a 6.6-inch Full HD+ screen with a 120 Hz refresh rate. It’s obviously an LCD screen given to the price point. The device brings the MediaTek Helio G96 SoC. To those unaware, this is a small refresh over the Helio G95 with tweaks for higher refresh rates. The phone still is based on the 12 nm process and brings two ARM Cortex-A76 cores. The handset will sell in variants with 4 GB and 6 GB of LPDDR4X RAM and 64 GB or 128 GB of UFS 2.1 internal storage. As a mid-range smartphone, we expect it to bring a micro SD card slot for further storage expansion. 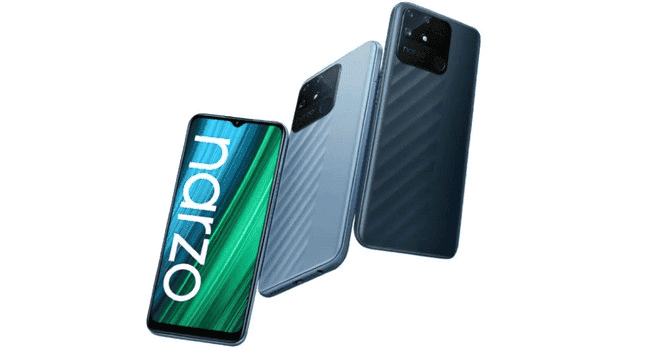 The device will draw its powers from a 5,000 mAh battery with 30 W fast-charging. It falls in line with some of the smartphones in the recently unveiled Realme 9 series. The device will bring a 50 MP main camera, and that’s the only one that really matters. There are other two 2 MP B&W portrait lenses and a 2 MP macro snapper, but honestly, they are there mostly for the numbers. The selfie and video calls are handled by a 16 MP snapper. The handset runs Realme UI 3.0 which also means Android 12. It’s good to see the latest software running here, as several brands are still launching devices with Android 11. That’s a good signal that future Realme smartphones will bring the latest firmware, even those in the low-end segments.

Previous Apple Store employees will unionize in the U.S.

Realme Narzo 50A Prime launched with 50 MP camera and more