Google Chrome has been the most popular browser for years. It remains so today with more than 60% market share on the desktop platform, according to the latest results from StatsCounter. However, things are changing backwards, since Safari is being overtaken by Edge, Microsoft’s browser. 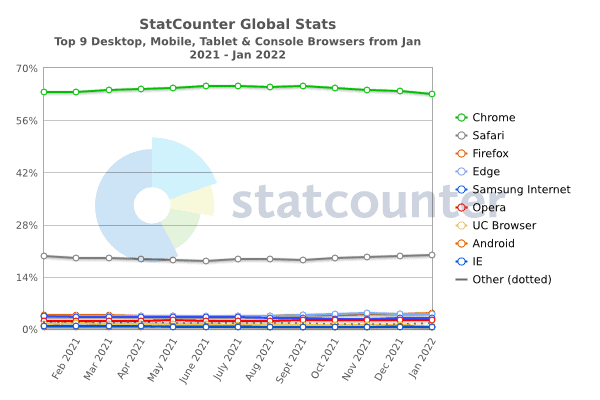 Edge quietly continues its merry way and after a long time racing behind Apple’s browser, the curves are crossing. Safari is still the second most used desktop browser with 9.84% market share (9.54% for Edge), but it has every chance of moving up to third by next month.

Behind Chrome, Safari and Edge, we find the usual browsers: Firefox (which got a gain lately and which peaks at 9.18%) and Opera (3%). 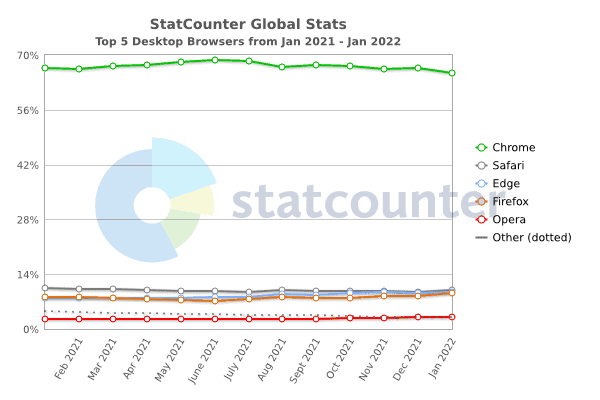 On mobile, the case is still very different. If Chrome is still number 1 (63%), followed by Safari pushed by the iPhone market (26.7%), third place is attributed to the Samsung browser (5.2%), used by default on smartphones from the manufacturer.

Edge, which is also available on mobile is unable to establish itself in this segment. Microsoft still has work to do. 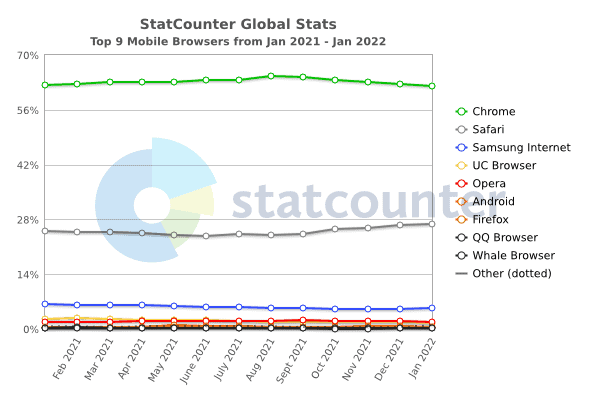 Edge comes a long way. Launched in 2015 to replace Internet Explorer, which was then dragging a disastrous image, the browser was installed by default on Windows 10. However, it did not convince the crowds. Microsoft gave it a second chance in early 2020 with a new version, this time running on a Chromium engine.

This version, in addition to being efficient and pleasant to use, seems to appeal to consumers. If Microsoft still does not reach the stratospheric market share of Chrome; the 10% is already a success for the browser.

in the world Chrome is firmly in first place as the most used browser (63.06%); whether it is desktop, whether you browse from tablet or smartphone. In second position is Safari with 19.84%, a value perhaps inflated by the fact that the app is installed by default on Mac, iPhone and iPad. The same goes for Chrome on Android devices, however.

Behind the Apple solution there is a close fight between Firefox, Edge, Samsung Internet and Opera: the Mozilla browser prevails with 4.18% market share, followed closely (4.12%) by that of Microsoft. The remaining ones – Samsung and Opera – hold 2.89 and 2.33% of shares respectively.

Here the situation becomes more interesting, because if it is true that Chrome reigns supreme with 65.38% of market share; it is equally true that the battle for the second position – the first most popular non-Chrome browser in the world on desktop – is definitely open. Safari, Edge and Firefox are included in a range between 9.84% (Apple) and 9.18% (Mozilla), while more distant are Opera with 3% and Internet Explorer with 1.06%. It is interesting to observe how Edge manages to maintain its advantage over Firefox: the historic overtaking took place two years ago and Microsoft does not seem to have any intention of giving way to its direct competitor.

Chrome is always in first place, Safari always in second; but at least if we consider the smartphone market, the gap is not so wide. 62.06% the Google browser, 26.71% that of Apple, followed at a distance by Samsung which still holds a 5.26% share. For the others, only crumbs remain: 1.89% Opera, 1.57% UC Browser.