In a sudden twist of fates, Xiaomi has recently declared war against Apple and its iPhones. The Chinese smartphone maker aims to become the biggest smartphone company in the world, in special after Huawei’s demise in light of the ban. However, it seems that the “Apple of China” will have big problems to overcome when the Cupertino-based brand is even becoming a preference in its domestic market.

A few years ago, Chinese brands didn’t need to be concerned with foreign brands trying to achieve popularity in the local market. Samsung, Apple never managed to overcome them in sales and popularity. However, the current times tell us a different story. The results of the end of 2021 have been much different for Apple with an exponential rise in the sales of current iPhone models. This fact certainly is leaving some executives at Huawei and Xiaomi offices furious.

Apple currently holds a market share of about 12 percent in China. It is usually the lowest in the third quarter, but that usually happens at the end of the life cycle of an iPhone. However, the last quarter is usually the strongest due to the release of a new iPhone series in September and the beginning of sales around October. One year before, in 2020, the sales were postponed, which eventually impacted the results. However, in 2021, everything was running smoothly. Therefore, Apple managed to grow in sales with the iPhone 13 series. 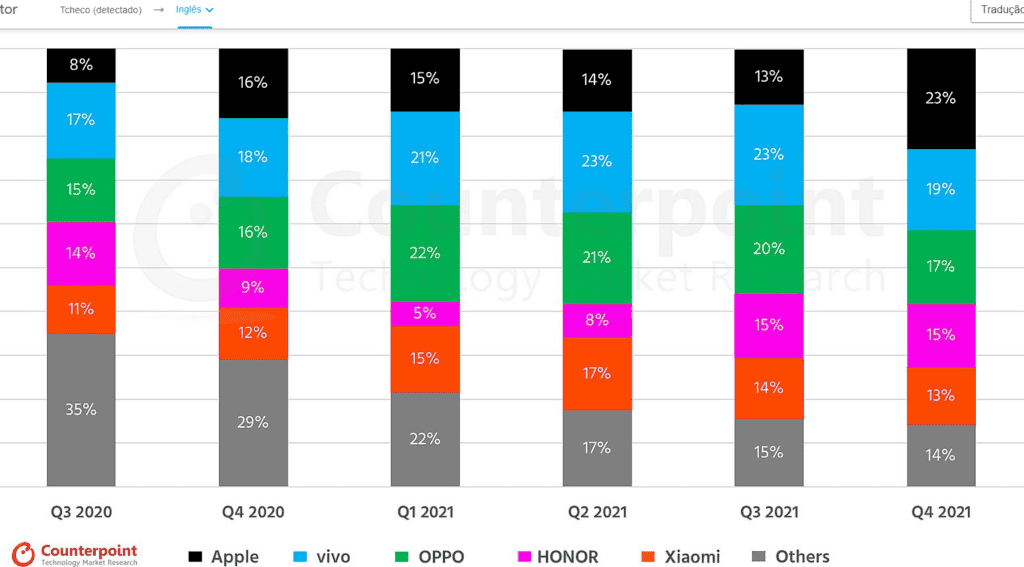 The company’s results for the last quarter of 2021 are quite impressive. As per Counterpoint Research, the company achieved a 23 percent slice of the Chinese market. That’s is an expressive number for a company that only sells premium smartphones. To put things in perspective, the Chinese market is one with the more appealing prices, especially with the domestic brands. Even so, there is a rise in premium iPhone sales.

Oppo, Vivo, Xiaomi, and Honor saw a significant gap recording shares from 16 to 17 percent. Honor certainly is a nice surprise, as the company managed to quickly become one of the most relevant brands in China. Of course, it benefits from the legacy established by Huawei but without all the problems the former parent company has to deal with. While Honor shines, we can’t even see Huawei among the top 4 companies. Honor may grow even more with the release of its Honor Magic 4 series.

For the fourth quarter of 2021, Xiaomi held the fourth position. This certainly isn’t a good position for a company that wants to dethrone Apple. We are yet to see how things will be at the end of the first quarter of 2022. Xiaomi recently unveiled its Xiaomi 12 series in China. Apple, meanwhile, should keep seeing positive numbers from its iPhone 13 series. Things will certainly become even more hectic in the second quarter of 2022. After all, the Cupertino-based brand will unveil the iPhone SE+ 5G / iPhone SE 3, which will be the cheapest iPhone featuring the same A15 Bionic from the premium lineup and 5G connectivity. This device may become an instant hit in China.

We are curious to see how the situation will evolve in the next few months.

Next Hisense Infinity H60 announced with vegan leather and Dimensity 810