Realme is gearing up to introduce its Realme GT 2 and 2 Pro on global markets. On February 28, the company has an event at the MWC 2022 stage. The brand will disclose its flagships for international markets and a new UltraDART charging system that reaches 200W. Ahead of the event, the Brazilian regulatory agency ANATEL has certified the Realme GT 2 Pro for launch in Brazil. So Realme is not only bringing this device to markets in Asia and Europe, it’s even heading to Latin America.

The Anatel certification confirms that a Realme handset with model number RMX3301 will soon reach the Brazilian market. However, it’s not possible to determine when exactly the device will go official. We can expect something in this regard in mid-March. The global model will have the same specs as China. As far as pricing is concerned, it’s not possible to determine how much the phone will cost there. However, Brazil is known for its crazily high import rates. So, the device will probably cost more than anywhere else. 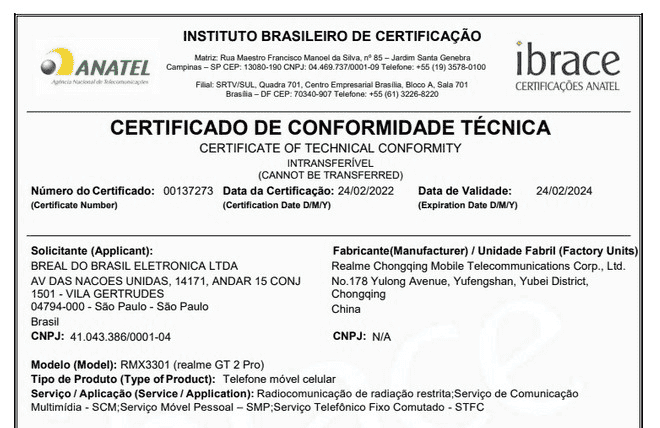 Realme may get a certain advantage over local companies since the market in Brazil is slightly weak in offer with only Samsung and Motorola. Brazil also had a lot of LG smartphones, but the company is out of the business.

For now, there is no indication whether the Realme GT 2 will reach the market or not.

In terms of specifications, the Realme GT 2 Pro is the most ambitious flagship released by Realme. It’s a true flagship with everything you expect from a handset in this category. It packs a 6.7-inch LTOP 2.0 AMOLED screen with a Quad HD+ resolution and 120 Hz refresh rate. The LTPO 2.0 technology allows the panel to dynamically adjust between 1 Hz and 120 Hz. The phone has a punch-hole cutout at the top-left part of the display that serves as a home for the 32 MP selfie snapper. There is a triple camera array at the back. It’s led by a 50 MP main camera with OIS, a secondary 50 MP ultrawide snapper, and a 3 MPO microscope lens.

Under the hood, the Realme GT 2 Pro has a Qualcomm Snapdragon 8 Gen 1 SoC with up to 12 GB of LPDDR5 RAM and 512 GB of UFS 3.1 storage. The phone has a 5,000 mAh battery with 65 W fast-charging support. The handset also has an in-display fingerprint scanner and runs Android 12 OS with Realme UI 3.0 on the top.

The Realme GT 2 Pro will come at a price of EUR 789 (~$885). The device is available in Paper White, Paper Green, and Steel Black color options.
Source/VIA :
TudoCelular