The Realme V25 smartphone has surfaced on the Geekbench benchmarking website, revealing some vital details before China launch. Realme will be unveiling the V25 in China on March 3. However, speculations surrounding the upcoming phone continue to make the rounds online. Earlier this year, the Realme V25 was spotted on the TENAA website with key specifications. This mid-range phone from Realme will offer 5G capabilities.

So, the Realme V25 will pack the 5G-enabled Snapdragon 695 SoC under the hood in China. Aside from that, the phone will reportedly ship with 12GB of RAM and house three rear-mounted cameras. Also, a robust 5,000mAh battery is likely to power up the entire system. Now, the Realme V25 has passed through the Geekbench website. The listing sheds some light on the handset’s key details before it goes official.

The Realme V25 smartphone’s Geekbench listing confirms the presence of Qualcomm’s Snapdragon 695 chipset. This processor support 5G, and is paired with 12GB of RAM. Furthermore, the phone’s octa-core processor will provide a 1.8GHz base frequency. In the single-core test, it acquired 687 points. Likewise, the device scored 2022 points in the multi-core test on the benchmarking website. 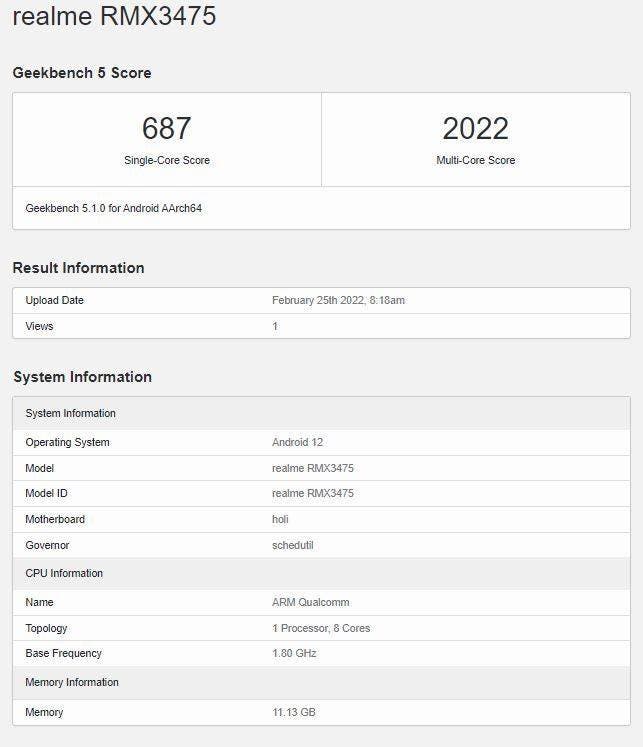 Furthermore, the Realme device listed on Geekbench carries model number RMX3475. It runs Android 12 OS out of the box. Although the test unit packs 12GB of RAM, Realme is likely to launch a 6GB or 8GB RAM model as well. According to a report by MySmartPrice, the Realme V25 could debut under the OnePlus branding.. Aside from that, the publication suggests that it is likely to carry the OnePlus Nord CE 2 Lite moniker, which had its camera details revealed earlier this month.

The Realme V25 could sport a 6.58-inch LCD panel with FHD+ resolution, and a 120Hz refresh rate. Under the hood, the phone is likely to pack a Snapdragon 695 SoC. It will probably come with 12GB of LPDDR4X RAM and offer up to 256GB of UFS 2.1 expandable storage. For optics, the phone will reportedly house a 64MP main camera, and two 2MP depth and macro lenses at the back. Also, the front panel could feature a 16MP shooter for selfies and video calling.

Moreover, the dual-SIM (Nano) phone’s 5,000mAh battery could support 33W fast charging. For connectivity, it will offer Bluetooth 5.1, dual-band Wi-Fi, and a dedicated microSD card slot. The side edge is likely to accommodate the fingerprint sensor. Lastly, the phone’s dimensions could be 164.3 × 75.6 × 8.5 mm and it could weigh 195 grams.