During MWC2022, Qualcomm and ByteDance announced that they will cooperate to develop XR equipment and software to realize a global XR ecosystem. Qualcomm has reached cooperation with a number of XR software and hardware manufacturers. For example, VR headsets such as Meta Quest 2 use Qualcomm XR-specific chips. ByteDance acquired VR headset manufacturer Pico for 5 billion yuan ($792 million) last year. Qualcomm President and CEO, Cristiano Amon revealed that ByteDance’s Pico’s future XR products will be powered by Qualcomm’s platform, the Snapdragon Spaces XR. 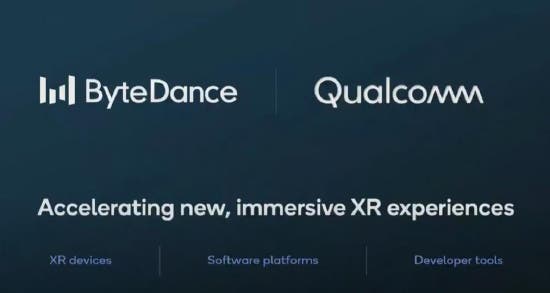 “This is an opportunity that could be as huge as the cell phone market, especially as augmented reality glasses become an extension of every smartphone,” said Cristiano Amon, Qualcomm president, and CEO.

Liang Rubo, CEO of ByteDance, pointed out: “We are also committed to building solutions that empower developers and creators. It is very exciting to be able to work with Qualcomm in terms of hardware, software, and technology to jointly open an ecosystem for Pico. We are very much looking forward to our future Pico devices powered by the Snapdragon Spaces XR developer platform.”

The Qualcomm to Snapdragon listening technology supports 16-bit 44.1kHz CD-level lossless Bluetooth sound quality. It also supports 24-bit 96kHz ultra-high-definition Bluetooth sound quality, and 32kHz ultra-wideband voice supports ultra-clear calls. This technology brings creators the ability to record in stereo and make a recorded content sound in stereo. It has a robust connection even in complex RF environments. In game mode, the audio latency is as low as 68ms and supports voice synchronous return. Presently, the S5 audio platform (QCC517x) and S3 audio platform (QCC307x) are sampling to customers. We expect the company to release these devices commercially in the second half of 2022.

Next Waymo gets the greenlight for charging money for its robotaxi rides!