The war between Russia and Ukraine has been on for almost a week. This crisis has been the hottest topic on the internet over the past few days. Many governments of the world like the U.S., U.K, and others have been imposing bans on Russia for invading Ukraine. Technology companies have been getting involved in the process. This is largely because these companies have to obey the restrictions of their host countries. However, while foot soldiers are fighting with guns and bombs, there is also a salient internet warfare going on. Recently, hacker groups got access to the Russian national EV charging network. They made all the connectors unavailable. The connector is displaying “Out of Service. Glory to Ukraine. Glory to Heroes…” 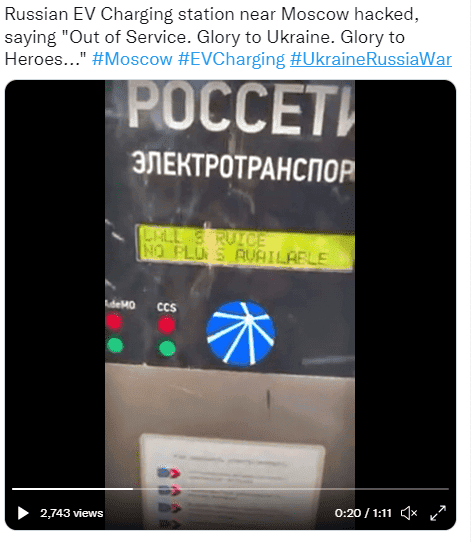 This is not the first attempt from some anonymous hackers to get into the Russian system. A few days ago, a hacker group pledged its support to Ukraine. The group has been messing with the Russian state TV website. It even jammed the radios of the Russian troops. The group further hacked into the Russian military communications frequency and jammed it with the Ukrainian anthem.

“The Russian Forces, who just talked about the “ambush”, are now being drowned out by the music. They cannot coordinate their actions if they cannot communicate,” the report states. The report claims that the communication system is messed up with Ukraine’s Anthem.

Presently, major chipmakers like TSMC, Intel, and others have stopped doing business with Russia. The intercontinental country has been faced with bans on all fronts. The U.S. and its allies are attacking Russia with all sorts of bans. Economic, trade, banking, sports, technology, and other bans and suspensions. However, these countries have not been able to support Ukraine with manpower. In fact, the U.S. and U.K. have repeatedly said that it is not going to have boots on the ground. This means that Ukrainians will have to fight their war themselves.

After the request from the Ukrainian Deputy Prime Minister, Mikhailo Fedorov, US space exploration technology company (SpaceX) sent a vehicle to Ukraine. The truck is full of Starlink user terminals. SpaceX CEO, Elon Musk has done the little he can to help Ukraine.

Conflicts in Russia and Ukraine have caused internet outages in parts of Ukraine. With SpaceX, Musk has multiple Starlink satellites in Earth orbit and is offering broadband services in some areas. SpaceX has more than 1,700 satellites in orbit, some of which pass over Ukraine. Nevertheless, there is no ground station in Ukraine. This means that the country can not receive Starlink network signals.