Recently, Apple’s official version of iOS 15.4 has aroused the attention of a large number of consumers. Many users report that after upgrading their iPhones to iOS 15.4, there were serious battery drain problems. The reports claim that even the iPhone 13 Pro Max with the largest battery capacity is terrible. This smartphone can barely take a user through half a day. In response, Apple’s official support said that this situation is “normal”. 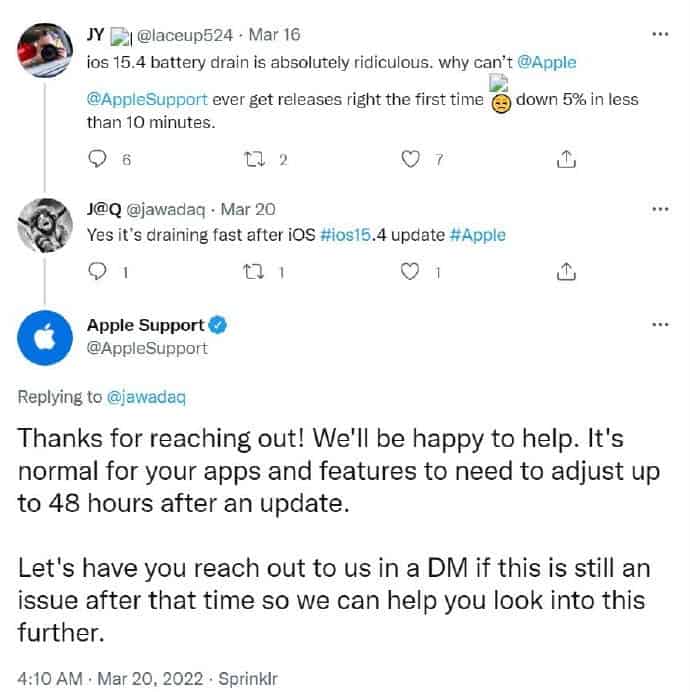 Of course, you may be wondering what is normal about a massive battery drain. Well, the official gives an explanation. Within 48 hours after installing the update, the applications in the smartphone need to adjust. It is normal for the battery life to drop or the mobile phone to heat up at this stage, and there is no need to worry.

Therefore, Apple officially recommends that users who encounter battery life problems after the 48 hour period should reach out to the company.

After the official rollout of iOS 15.4, users started complaining of battery drain issues. A complaint reads

“Battery life on iOS 15.4 is really bad. After 24 hours, I lost 80%, but the screen was active no more than 2 hours and I only use Safari, YouTube, Instagram, Uber”

Another user had a similar complaint about this update

It is quite common for a new iOS update to cause a sharp drop in the autonomy of some iPhones. In recent times, each operating system update has come with a series of complaints. However, this is a completely normal phenomenon, and, most of the time, temporary.

A new update usually triggers a series of tasks in the background. These tasks may include battery calibration. Generally, it takes a few days for the calibration to be complete. After the process, everything returns to normal.

The new Apple iOS 15.4 brings 37 new emojis, support for adaptive triggers in the DualSense controller, as well as the ability to customize buttons on all connected gamepads, a widget for the Wallet app (in the US). The update also supports AirTag anti-surveillance features and a new Siri voice.