Along with the increase in the number of cameras in smartphones, the image sensor market is also growing. According to analysts at Strategy Analytics, at the end of 2021, the image sensor segment grew by 3% and reached $15.1 billion.

The global smartphone Image sensor market in 2021 secured a total revenue of $15.1 billion; according to the Strategy Analytics Handset Component Technologies service report.

In fact, this market was divided among themselves by three companies, which accounted for 83% in terms of money. It is quite predictable that Sony is in the lead here, which controls 45% of the image sensor market. Samsung System LSI managed to get 26% of the profit from the sale of sensors. In third place was OmniVision with an 11% profit share in the image sensor segment. The remaining 17% came from other manufacturers, but they do not affect the balance of power in the market. 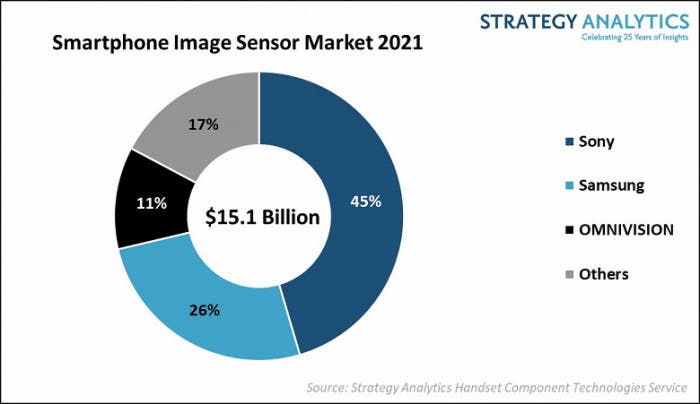 Analysts also concluded that the growth of the market is due to the increase in the number of sensors in smartphones. Moreover, manufacturers are most actively buying useless stub modules for macro photography and depth analysis. These sensors accounted for 30% of the total volume of all supplied sensors. As for wide-angle sensors, their share was just over 15%.

Stephen Entwistle, Vice President of the Strategic Technologies Practice at Strategy Analytics commented, “Large format and high-resolution image sensors will be a key area of growth as OEMs aim to apply superior camera capabilities within smartphones. However, demand continues to be influenced by the CIS inventory as well as the supply shortages for smartphone components.”

Previous Home Pong Atari Prototype Goes Up For Auction, Sells For Over $270,000