The Realme Pad Mini was confirmed to arrive “soon” in the Philippines. The company’s next entry in the segment of tablets is, as the name suggests, a cost-effective take on the Apple iPad Mini. Obviously, the specs do not come near Apple’s offering. Anyway, the device had its launch date confirmed for April 4. After many teasers, the device had its official date confirmed alongside some of its key specifications. Thanks to a popular retailer in the country, we know exactly what this product has in tow.

The Realme Pad Mini will bring an 8.7-inch display. We have to say that this isn’t exactly “mini”, but perhaps, with so many tablets bringing 11-inch, 12-inch displays nowadays, we assume that sub-9-inch is the new “mini”. Anyway, it’s smaller than its big sibling the Realme Pad which brings a 10.4-inch screen. The mini certainly will be a basic IPS LCD. Under the hood, the phone will pack an Unisoc chipset. It brings the Unisoc T616 which offers a mid-range performance with 2 x ARM Cortex-A75 cores with a 2.0 GHz clock speed. The device also has 6 x ARM Cortex-A55 cores clocked at up to 1.8 GHz. Anyway, the tablet will bring a large 6,400 mAh battery with 18 W fast charging. 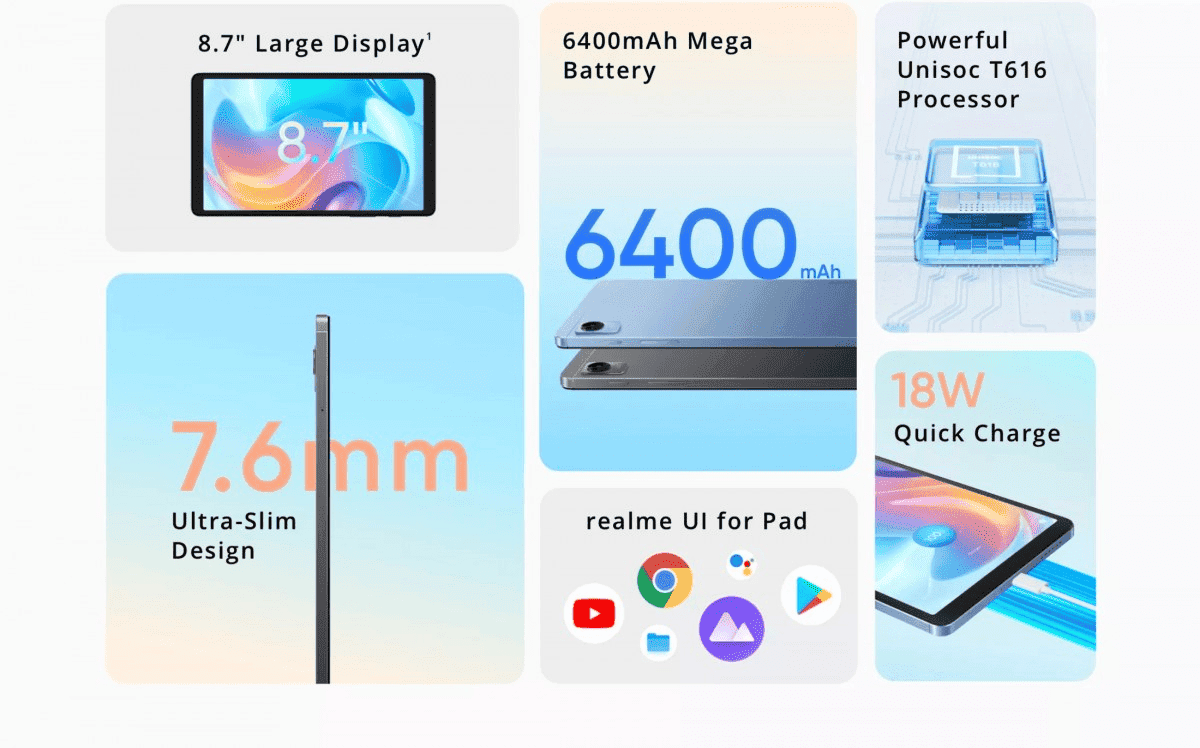 According to the listing on Lazada, the new tablet will bring the Realme UI for Pad. For those unaware, this is a branch of Realme UI with some tweaks and scaled UI for devices with larger screens. The only downside is that the retailer lists the tablet with Android 11. The new tablet will still be running the outdated Android version. Hopefully, it will get Android 12 in the future. At first, Realme said it would not bring Android 12 for the Realme Pad. But after a huge backlash, it has decided to do so. However, at the time of this writing, the tablet is yet to join the early access program for Realme UI 3.0.

Worth noting that the Realme Pad Mini is listed on Lazada with a PHP 99,990 price. However, this is far from the reality as it translates to basically $2,000. That’s a common Lazada behavior to list some products with “placeholder prices”. According to rumors, the tablet will cost less than PHP 10,000. After all, the basic Realme Pad comes with a PHP 11,000 price tag.

Realme has an event scheduled for India on April 7. During the event, it will disclose the Realme GT 2 Pro and a new Realme Smart TV Stick. We wouldn’t be surprised to see the Realme Pad Mini tagging along for an Indian launch.