Earlier today, Realme released a new generation of its mid-range smartphones in the Realme Q5 series. There are three models – the Realme Q5, Q5 Pro, and Q5i. By the way, the latter went on sale yesterday, before the official launch today.

The Realme Q5 sports a 6.6-inch 1080P LCD straight screen. The latter also supports a 120Hz refresh rate. Because of the LCD material, the phone carries a fingerprint recognition module on the side.

Inside, there is a Snapdragon 695 processor, which is an upgraded version of the previous Snapdragon 690. It is manufactured with a 6nm process and integrates a Kryo 660 CPU core with the main frequency of 2.2GHz and Adreno 619 GPU.

Though the aforementioned features look quite attractive, the selling points of this device are fast charging and battery life. The 5000mAh battery supports 60W smart flash charging. The latter will allow the phone to get fully charged in 16 minutes. In standby mode, the battery will last for 29 days.

The Realme Q5 also uses the industry’s first corrugated gradient coating process. There are three colors to choose from – Black, Silver, and Yellow.

Under the hood, the Pro variants sport the Snapdragon 870 processor.

Like its sibling, this phone has a 5000mAh battery, which supports an 80W super-fast charging. The battery can reach 100% in just 33 minutes.

In order to bring a better performance experience, the Realme Q5 Pro uses the same diamond ice core cooling system as the Realme GT series. Its stainless steel VC area is ​​up to 4129mm².

On the back, this handset carries a 64-megapixel wide-angle triple-camera. At the same time, the front-facing camera has a 16-megapixel resolution. 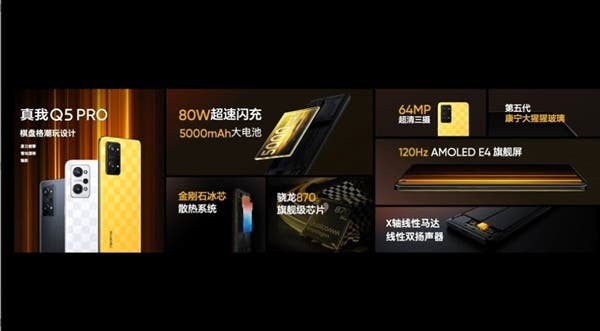 Also, our protagonist comes with an X-axis Tactile linear motor and is equipped with Dolby Atmos dual speakers.

The phone runs on Realme UI 3.0, which supports the new free-floating window, information desensitization for photo and video sharing, and other functions.

Apart from the mentioned two models, there was also the Realme Q5i.

The Realme Q5i adopts a more fashionable design style. Moreover, we are dealing with Realme’s first smartphone using a straight-edge middle frame design. Though the phone’s battery has a 5000mAh capacity, it didn’t affect the thickness of 8.1mm. The smartphone weighs 190g.

On the front, there is a 6.58-inch LCD waterdrop screen with a refresh rate of 90Hz and an 8-megapixel front camera.

The Realme Q5i also comes with the Dimensity 810 5G processor. The large core inside the chip is Cortex-A76 with the main frequency of 2.4GHz. Whereas, the small core is Cortex-A55. It also integrates the Mali-G57 MC2 and supports LPDDR4X and UFS 2.2.

On the rear, we have a dual-camera consisting of a combination of 13MP and 2MP sensors. The latter supports super night scene mode, portrait mode, and AI ID photo.

In addition, the machine retains a 3.5mm headphone jack, supports side fingerprint recognition, comes with dual speakers, and has a maximum 1TB memory card expansion. The phone runs on the Realme UI 3.0 system based on Android 12.

Unlike the above two models, there are only two colors available – obsidian blue and graphite black.

The above two are already available for pre-order but they will start shipping on April 27. As said, the Realme Q5i has been on the shelves starting yesterday. 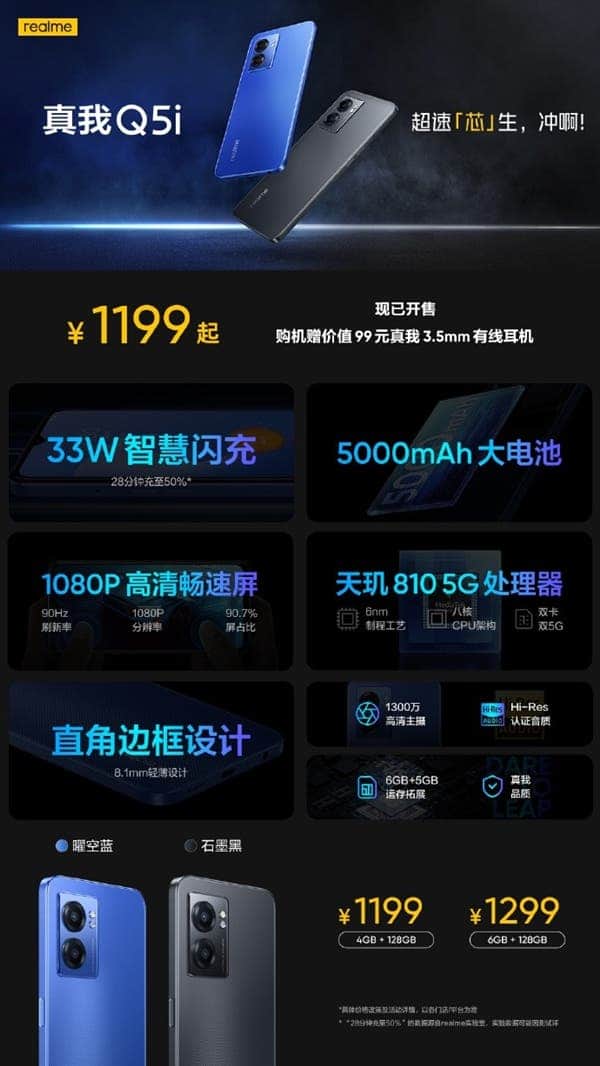