Google’s Android and Apple’s iOS dominate the smartphone operating system (OS) space. Today 7 out of 10 phones run on the Android OS, while two of the remaining three are most likely to be iOS powered. Occasionally, one out of those three will be using one of the other less known OS’. However, Android’s dominance is coming under increasing pressure from the other players if we go by market data.

Although Android is the first choice in most regions, the North American market is dominated by iOS and the competition between the two mobile operating systems is fierce. 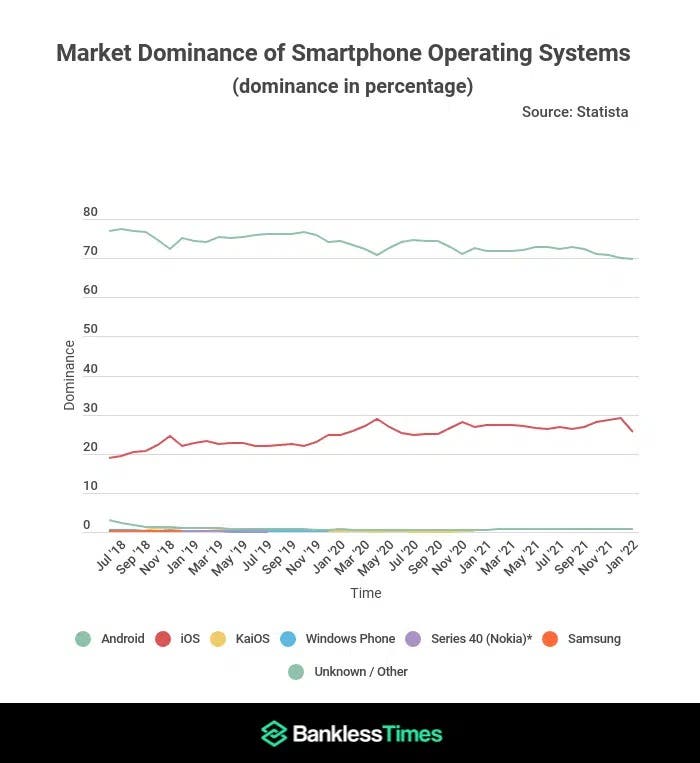 The study pointed out that the Asian and South American continents accounted for 81% and 90% of Android shares respectively. The share of iOS in Asia and South America is 18% and 10%. As for the other mobile operating systems, they have a combined share of less than 1% on both continents.

In North America and Oceania, iOS and Android go head-to-head – iOS has a 54% share of the two aforementioned markets, Android has nearly 45%, and the rest of the OSs again total less than 1%.

Last but not least, although the data does show a significant drop in Android’s share. But in 10 mobile devices, Google OS still occupies more than 7. Obviously, Apple still has a long way to go to completely dominate the global mobile device market.

“Android’s loss of market share boils down to heightened competition within the OS space. A look at the data shows that  iOS gained 6% between July 2018 and January 2022. From 19.4% then, Apple has grown its OS market share to 25.49%. Other small scale OS developers account for the remaining 1.58% that Google shed”.

Available data shows that the OS’ dominance is geographic. For instance, 84% of all smartphones in Africa are android-based. iOS accounts for roughly 14% of the continent’s devices, while Samsung, Nokia, and KaiOS share the remaining two percent or so.

A similar situation obtains in Europe, where Android OS has a market share of 69.32%. While iOS registers better prospects here than it does in Africa, as it runs 30% of all the phones here. Again Samsung, Nokia and other developers have to contend with a miserly 1% of the market.