Despite all the difficulties in the market and the growing cost of smartphones, the segment of premium devices was actively growing last year. According to Counterpoint Research analysts, this segment grew by 24% year-on-year in 2021. Interestingly, the niche of premium devices grew more actively than other segments by 7%. Top smartphones set a new record for themselves – they accounted for 27% of global sales. This means that every fourth smartphone sold in 2021 was premium. 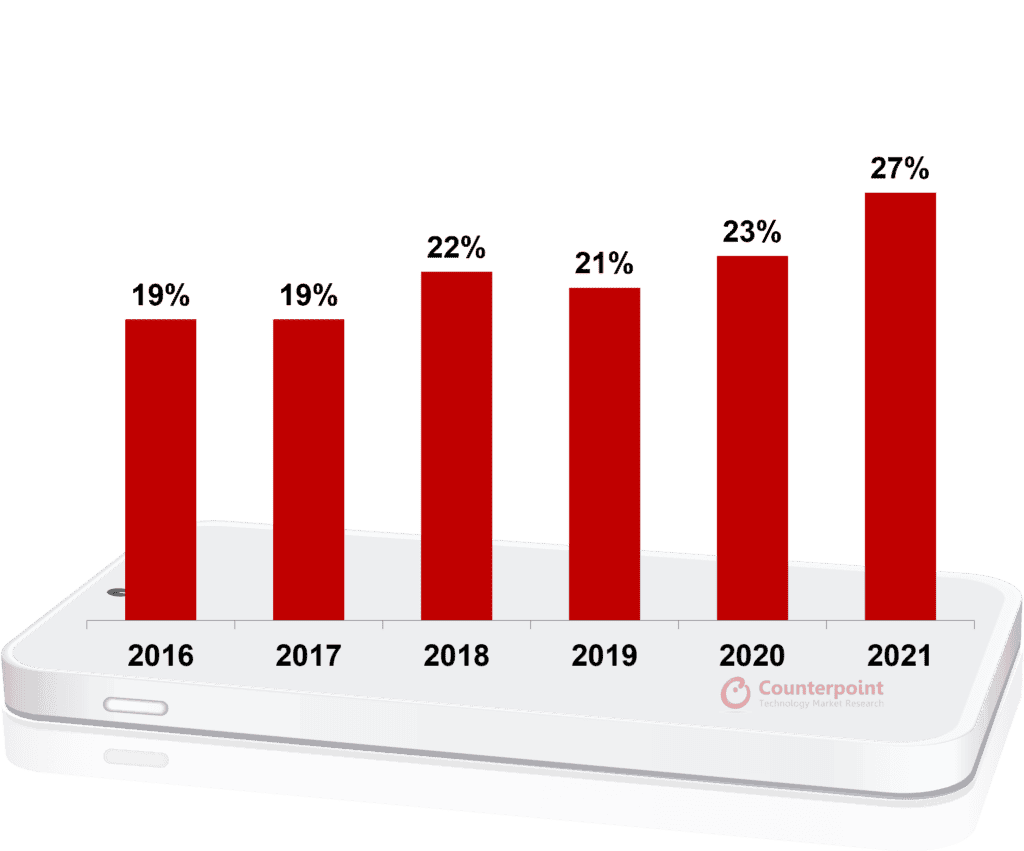 Among the reasons for this trend is the increase in demand for 5G smartphones in advanced economies. Companies such as Oppo, Vivo, Xiaomi and Apple grew especially actively in China and Western Europe; mastering the niche freed up after the departure of Huawei.

Commenting on the premium market growth in 2021, Research Director Tarun Pathak said, “The premium market growth in 2021 was driven by a mix of factors, including replacement demand, OEM strategies and supply chain dynamics. Upgrades to the affordable-premium segment in emerging economies and replacement demand for 5G devices in advanced economies continued to drive growth. OEMs including Apple, OPPO, vivo and Xiaomi were aggressive in capitalizing on the premium market gap left by Huawei, especially in China and Western Europe, driving growth in the segment. Amid the supply chain woes, the ecosystem players also prioritized the premium segment devices due to increased margins and profitability. The growth rate was also somewhat higher in 2021 due to the sales and launch schedules in 2020 being impacted by the pandemic.”

Sales of premium smartphones reach the highest level ever in 2021

Speaking in terms of companies, it is quite predictable that Apple is in the lead here; which controls 60% of the premium device segment. It owes its success to the good sales of the iPhone 12 and iPhone 13 series. Analysts especially note that the fourth quarter of last year was a record for the company in China.

Samsung added 6%, which was second after Apple in a number of regions. The Galaxy S21 series devices sold quite well; but the company’s best result was prevented by the abolition of the Note line; and the late release of the Galaxy S21 FE. The largest growth in the premium segment in 2021 was achieved by Oppo and Vivo. The annual growth was 116% and 103% respectively. If Oppo is growing at the expense of the European market; then Vivo has been successful in China and Southeast Asia.

Commenting on the premium segment outlook, Senior Analyst Varun Mishra said, “Going forward, the premium segment, driven by the replacement demand across markets, is likely to keep growing and outpace the global smartphone market growth. Another large opportunity driving the segment would be the installed base of Huawei users in China, which is approaching its replacement cycle. The competition in China’s premium segment has been strong, but Huawei maintaining its second position in 2021 indicates a future opportunity for other OEMs. Further, the launch of foldables at a lower price than before will also drive growth in the premium market. Samsung has showcased foldables as a viable market. A foldable phone from Apple will be a nod to the robustness of the technology and further drive growth.”

Previous Samsung Exynos 2200 hit with a plethora of negative reviews