The much-awaited Samsung Galaxy M53 5G smartphone will finally launch in India today, April 22, succeeding last year’s Galaxy M52 5G. Samsung is on the verge of taking the wraps off its next 5G-ready smartphone for the Indian market. During the launch, the South Korean tech firm will be putting multiple speculations surrounding the handset’s specs, features, and price in India to rest. The Samsung Galaxy M53 5G smartphone’s price in India will be revealed at the impending launch event. To recall, the Galaxy M series phone made its global debut earlier this month. 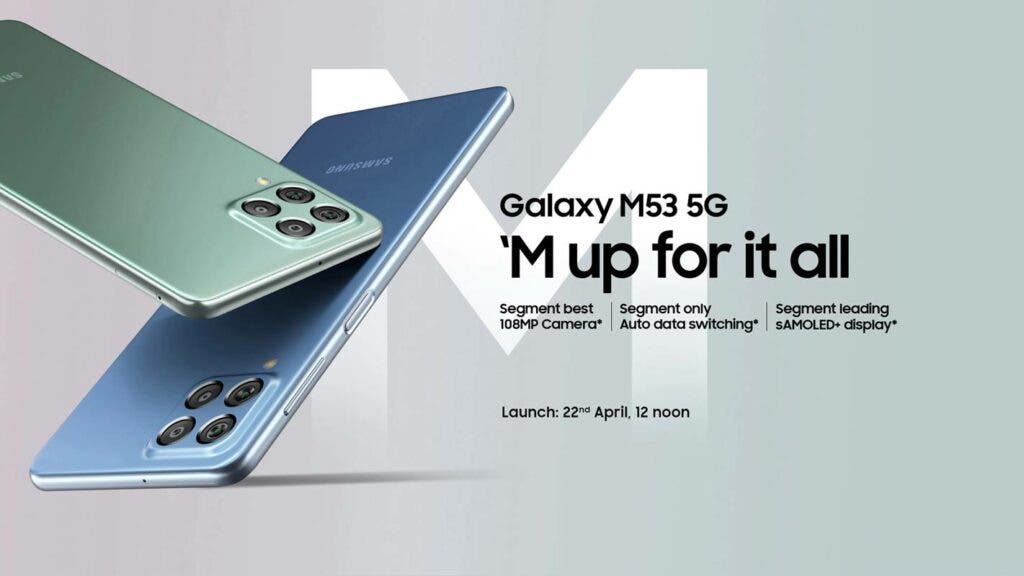 Not too long ago, a dedicated microsite for the Galaxy M53 5G went live on Amazon India, revealing its launch date in the country and other key details. As stated earlier, the Samsung Galaxy M53 5G India launch event will be held today, April 22, at 12 PM (noon) IST. You can watch the live stream of the launch event on the official Samsung YouTube channel. Now, the upcoming Galaxy M-series phone boasts a wide range of uber-cool features. For instance, it houses an impressive 108MP main camera on the back. Aside from this, the phone’s AMOLED display offers a high refresh rate of 120Hz.

Furthermore, the smartphone could set you back INR 25,000 in India. However, Samsung has neither confirmed nor denied rumors surrounding the handset’s pricing in India. Notably, the Indian variant could carry similar pricing as its predecessor, the Galaxy M52 5G. The 8GB RAM+128GB storage variant of the Galaxy M52 5G retails for INR 31,999. Likewise, the 6GB RAM+128GB storage model carried a price tag of INR 29,999 at launch. Although it is still mum on the Samsung Galaxy M53 5G price in India, the tech giant has shed some light on the upcoming device’s key specs on its official website.

The phone Galaxy M53 5G smartphone has been floating around the rumor mill for a long time. The phone’s key specifications have previously been tipped by noted leaker Yogesh Brar. However, the official website reveals that it will boot Android 12 OS with One UI 4.1 on top. Furthermore, the phone sports a Super AMOLED+ display that offers a 120Hz refresh rate. Under the hood, it will pack a powerful MediaTek Dimensity 900 SoC. Moreover, this processor pairs with up to 8GB of RAM. It supports Samsung’s RAM Plus feature that converts unused storage space to virtual RAM.

For optics, the Samsung Galaxy M53 5G Indian version will house four cameras on the back. This rear-mounted camera setup features a 108MP primary sensor, an 8MP ultra-wide sensor, and a couple of 2MP sensors for depth and macro shooting. Upfront, the phone sports a 32MP selfie camera. For connectivity, the handset offers multiple options including a USB Type-C port, GPS/ A-GPS, Bluetooth 5.2, and more. The phone uses a 5,000mAh battery for drawing its juices. This cell supports 25W fast charging.