As expected, Qualcomm is back with its mid-year refresh for the Snapdragon flagship series. This time around, the Qualcomm Snapdragon 8 Gen 1 which was the first of a new nomenclature gets revamped to Snapdragon 8 Gen 1+. However, this time around, the upgrade is way more important, especially for Qualcomm. On paper, all three flagship SoCs of 2022 are similar – SD 8 Gen 1, Exynos 2200, and Dimensity 9000. The biggest difference is with MediaTek which uses TSMC manufacturing, while the first two are made by Samsung.

A few weeks after the first SD 8 Gen 1 phones reached customers, there were many reports about heating and performance throttling. Then, Qualcomm expressed its unhappiness with Samsung’s manufacturing. The US-based chipmaker urged TSMC for manufacturing a new range of Snapdragon 8 Gen 1 SoCs. For a few months, we have been calling this chip the “TSMC version of Snapdragon 8 Gen 1”. However, we all know that this name would not fit into marketing campaigns. Then, Qualcomm unified its mid-year refresh with the launch of the all-new chipset, and here comes the Snapdragon 8+ Gen 1.

Snapdragon 8+ Gen 1 comes to save performance and dissipate heating

The SD 8+ Gen 1 (yes it’s 8+ and not Gen 1+) comes with modest speed improvements. However, the biggest highlights are energy efficiency. Needless to say, the Snapdragon 8 Gen 1 is a fast processor, but the heat and power usage are far from optimal. Now, the new processor come to fix these two issues. The performance is 10 percent higher, whereas the power-efficient gets a significant upgrade of around 30 percent. The cores configuration and architecture are the same, however, the peak ARM Cortex-X2 core can now reach 3.2 GHz. It matches the supreme speeds of the Snapdragon 870 from 2021. The 3 x ARM Cortex-A710 cores (Gold) get a bump to 2.75 GHz, whereas the Cortex-A510 (Silver) gets upgraded to 2.0 GHz. For comparison, the Snapdragon 8 Gen 1 had 3.0 GHz, 2.5 GHz, and 1.8 GHz clock speeds. 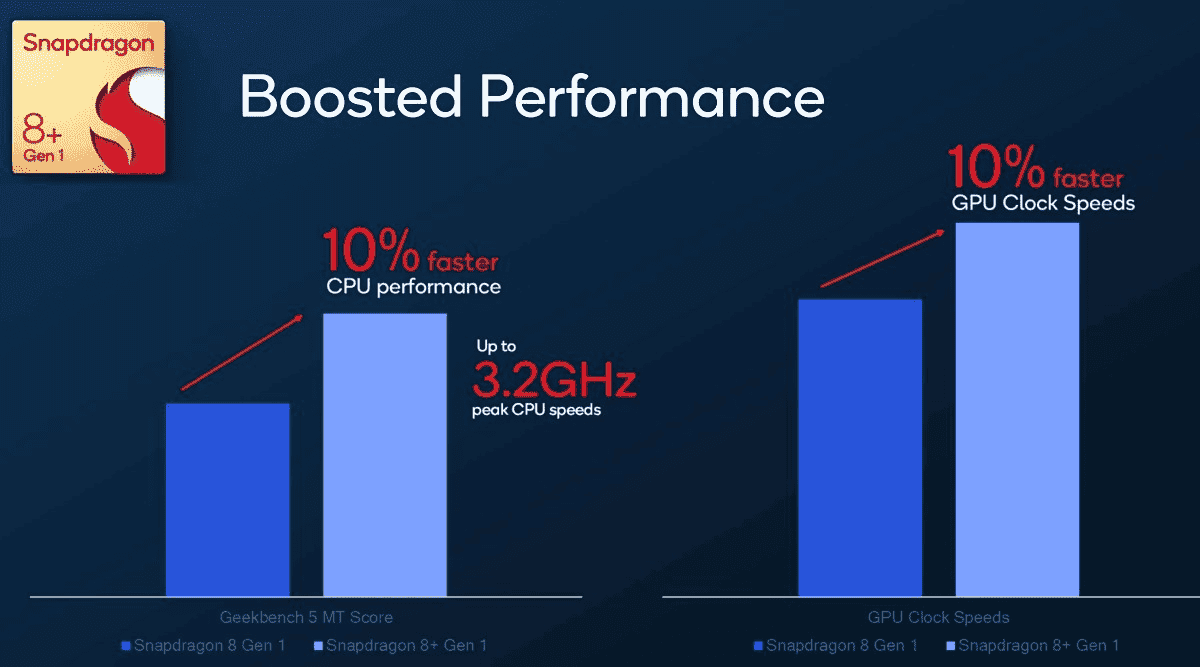 The overall power efficiency on the SoC level has improved by 15 percent. According to the company, a phone using the same chipset can stream video for 1 hour and 30 minutes longer than one using the old chip. When it comes to light usage, the difference easily rises to almost 6 hours.

The same hardware in essence

Apart from the different speeds, efficiency, and manufacturer, the remaining hardware data is the same. The SD 8+ Gen 1 supports up to 16 GB of LPDDR5 RAM and UFS 3.1 storage. The display driver can handle QHD+ at up to 144 Hz or 4K at 60 Hz, complete with 10-bit rendering, and HDR 10+ support. The connectivity comes from the Snapdragon X65 model with theoretical peak speeds of 10 Gbps. the chip also supports Wi-Fi 6/6E at up to 3.6 GHz. There is also support for Bluetooth 5.3 connectivity with support for aptX lossless and Bluetooth LE audio. 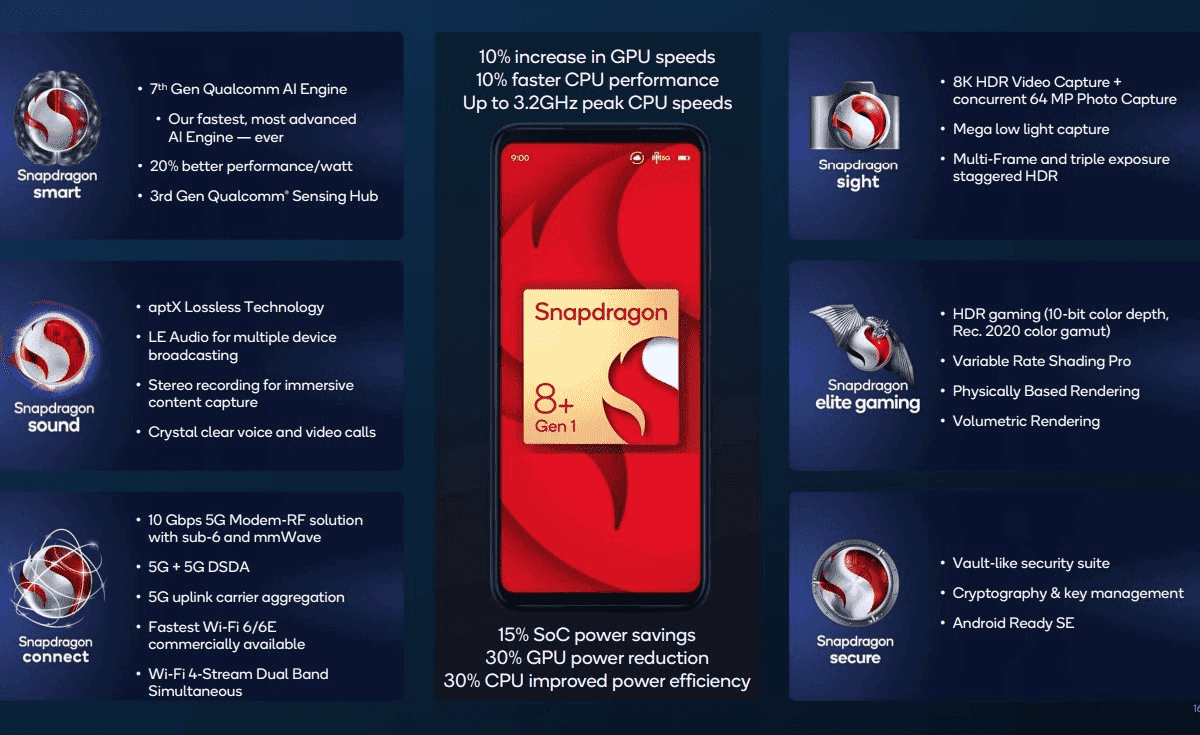 According to the chipmaker, the SD 8+ Gen 1 smartphones will come starting in Q3 (July and September). Unlike previous generations, the Snapdragon 8+ Gen 1 will appear on a lot more smartphones. There are many companies preparing new contenders. ASUS, Black Shark, Honor, iQOO, Lenovo, and Nubia. Moreover, we have Motorola, OnePlus, and Xiaomi with their “Ultra” flagships. Even Vivo, ZTE, and OSOM are preparing smartphones with the new chip. According to leaks, Samsung is preparing variants of its new foldable with the Snapdragon 8+ Gen 1.

Despite the differences, MediaTek is not really getting the edge of the flagship market with its Dimensity 9000. The company still leads the overall market, but Qualcomm is still the favorite in the flagship segment.