Yesterday, Xiaomi officially announced a collaboration with the well-known photo brand Leica. The news caused a stormy reaction and discussion on the network. The heads of the two companies considered it necessary to comment on the partnership. Thus, Leica CEO Matthias Harsch was saying that an agreement on a long-term strategic partnership took place between the companies. He also confirmed that the joint efforts have created a flagship “which will make a huge breakthrough in the field of image processing.”

At the same time, he made it clear that just sticking the Leica nameplate and adding filters from the German company will not end the matter. Serious work is ongoing at the software and hardware levels, and the plans are for an annual release of the flagship, where the camera will be available with the participation of Leica. The head of Xiaomi, Lei Jun, also gave his comment by publishing a large and spatial post. Unfortunately, there are no specifics in it, everything was limited to the promise of something grandiose, and for this a lot of work has been done. He confirm that the first smartphone with a camera from Leica will be available in July.

Details of the Cooperation of Xiaomi with Leica 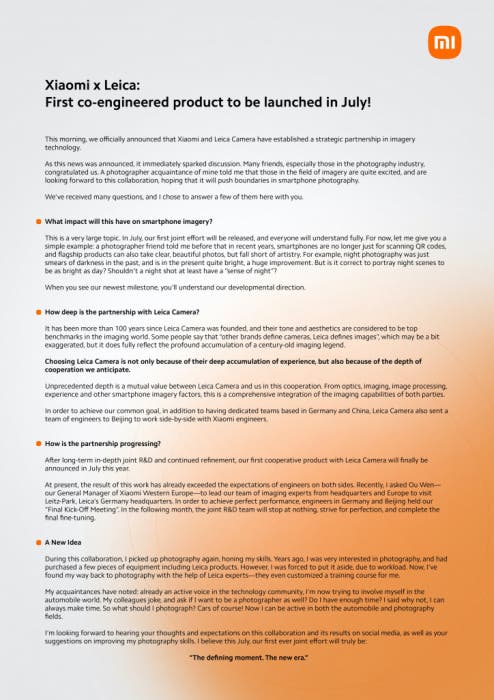 Together with the German company, a new direction for the development of camera phones has been chosen, and the latest flagship of the company will show which path is chosen. Leica was not chosen by chance. It has a wealth of experience that will come in handy when working together in optics, imaging and imaging. The Leica team of experts is in China to work side by side to achieve the set goals.

Further, Lei Jun consider it necessary to inform that he was even given an individual course on creating a photo by Leica employees. And mobile photography fascinated him. Now he has become an avid photographer who aims to take photos everywhere and anytime. The company‘s first Leica phone will arrive in July and it will likely be the Xiaomi 12 Ultra.

Xiaomi’s partnership with Leica is ending years of cooperation between the well-known camera manufacturer and Huawei; which has been going on since 2016.

In response to a question from Android Authority, a spokesman for Chinese tech giant Huawei went on record as saying; “We can confirm that the cooperation between our two companies ended on March 31st.”